There's a Knox Store Convenient to Every Social Rendezvous

For several months in 1929 the "Knox Store" had been warning New Yorker readers about the folly of wearing the wrong hat. In these advertisements, the unlucky fellow would show up at a football game in a tophat, or at a piano recital in a bowler, the point being that only Knox can keep you stylish and "proper" for every event.

None of these ads have been interesting enough to post...until this one from December 21st. 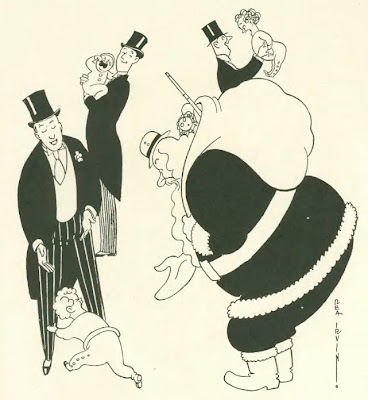 Why is the child running away and crying?

Far better for the heirs to know at once that there isn't any Santa Claus than to render them permanent idiots by his sudden appearance in the Wrong Hat, just because you rather fancied yourself in the part.

So if you're playing Santa this year, make sure you wear the correct Santa hat...otherwise you'll turn all the little heirs into permanent idiots.

Beautiful!
Posted by Adam Thornton at 8:01 AM

Never been much of a hat person myself. They're more of a necessary evil during the chilly seasons, and, often, an inadvertant fashion statement (the wrong statement!).

I can therefore understand the child's trepidation at this obviously faux Father Christmas (or so the bowler would indicate).

Of course, back in the Roaring 20's, you were not a "finished" gentleman without your properly-chosen hat.

So prevent moron children and dress right! Right on, Knox!

I don't think that men even WEAR fancy hats any more, do they? Toques certainly, and sometimes you'll see a hipster wearing something deliberately eye-catching...

...but nobody else? Obviously you're in style!

However, it looks way better on him than on me - so, yes, I'm hatless again.

Maybe I'll get one of those way-far North types - with the ear flaps. Not stylish, but very practical.