A Night With the Creeps 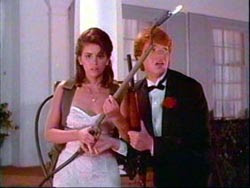 As a child and a teen I had a strange ability to re-watch movies, and while I still enjoy seeing a good movie two or three times, back then I could literally watch my favourite films ad nauseum. Dozens of times. With as many different people as possible. Until I knew every line and nuance off by heart.

Only certain movies could invite such scrutiny, and one of them has finally been given the deluxe treatment after twenty-three years. If you're not a film geek then you may never have heard of it, but otherwise you might be as excited as I was today: yes, I finally got my hands on the at-long-last release of "Night of the Creeps" on DVD.

This is not a film for everybody. As fun as it is as a successful blend of horror, comedy, sci-fi, and cop story, it's just complicated enough to confuse the inattentive. Much of the joy is in the little details -- now gloriously visible after years of bootlegs and VHS copies -- so if you're unwilling (or unable) to put the pieces together...well, you'll just find it confusing and annoying.

One thing that's exciting about this release is to finally have one of my personal, esoteric obsessions be reaffirmed: other people love the movie for the same reasons I do! They've had the same questions and impressions over the years that *I* have had, but which I've never been able to share! Though nobody comments on the coolness of Stan Ridgway appearing twice on the soundtrack (I hope he gets residuals).

It's also wonderful to see the director (Fred Dekker) finally get acknowledgment for the unique little film that he poured his soul into, only to see it flop and disappear from sight. Now, suddenly, "Night of the Creeps" has a new fan base, and it's getting the recognition that he (and we) always knew it deserved.

Despite the dozens of times I've seen the movie, there are lots of little things that I only noticed for the first time with this new transfer: the trails of blood and goop that the departing slug-creatures leave, and the dead goldfish in the dorm room, and the collapsing frat boy that was previously obscured due to pan-and-scan. And it's a thrill to finally have the director explain certain oddities in the movie...why was Cynthia Cronenberg's final line cut off during her fade-out with Brad (because it was deemed too raunchy), and what was with J.C.'s awkward and nonsensical shout of "Tell HIM that"? (he was responding to a line of dialog that was subsequently cut).

The cast interviews are a bit saccharine in their (apparently genuine) love for the film, but the deleted scenes are very cool, especially a bizarre and stagey '50s scene that probably would have alienated audiences.

I'm in heaven. One of my favourite movies has been restored to look better than it probably ever did, some new material has been revealed, and many mysteries have finally been solved. So sad that a piece of entertainment should make me feel so happy! But I think that "Night of the Creeps" was a truly special film, not least because it finally made us realize how creepy "The Stroll" by The Diamonds was. I gives me shivers now whenever I hear it.

I'm really looking forward to watching this again, as I haven't seen it since the 80s. (I seem to remember watching it on the same night as Return To Horror High, whose high point is a scene where Maureen "Marsha" McCormack rubs blood all over her chest and moans. Classy.)

Fred Dekker also made one other sadly under-rated 80s classic, The Monster Squad. (Co-written with Shane Black, no less.)

Hilariously, Sony decided to also release Night Of The Creeps on blu-ray. I knew that player would pay off one day.

I would ALMOST buy a Blu-Ray to watch Night of the Creeps...just to catch more bizarre details in the background!

And to see more monofilaments pulling the creeps through the grass. They're pretty obvious these days. The when grass ISN'T involved the creeps still look GREAT>

I remember watching this one with you. I'm gonna have to look for it at the video store.

That was me. Stupid internets.