The Saga of the Bathroom

The previous owners of The Barracks had interesting taste in colour and style. The kitchen -- in stuart gold (HC-10) -- almost smells of sunflowers, planted on the great plains (CC-334) of the prairie dustbowl. Meanwhile some of the walls are a depressing mocha brown (2107-20) and the master bedroom is a downright murderous terra cotta tile (2090-30).

The bathroom, however, is in beautiful smoked oyster (2109-40), and while the rest of my furniture whizzes hither in trucks and trains (except for my living room chairs, which apparently are being upholstered by narcoleptic turtles), the bathroom remains the most finished part of the house. 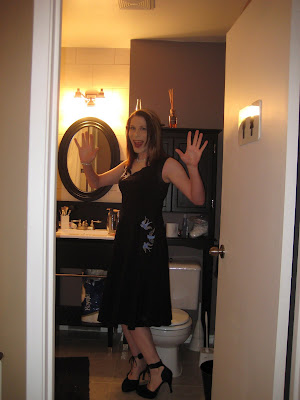 And look at that bathroom light! They previously had a beautiful fixture in there that perfectly matched the decor...but only took sixty watt "chandelier bulbs," within nearly-opaque frosted glass, mounted high on pedestals which cast shadows on...well, everything.

Getting "into face" is difficult enough in the best of lighting, but if you can't even see yourself without a flashlight...well, you'll end up looking great in the bathroom, but you'd better STAY in the bathroom for the rest of the night. No, it was definitely time for a brand new super-bright light.

So my mom and I (you'll read that a lot in this blog) went hunting for a bathroom light, and while the plain-jane horizontal vanity fixture seemed the most practical...well, it looked CHEAP. Second-best was a mirrored light which dangled up to 200 watts of pure brilliant glare.

But how to install it? I had vague plans about getting a more knowledgeable friend to do it, but on Saturday morning I decided not to allow myself to be victimized by simple home renovation, even if it meant getting electrified and killed during my first week here.

Fortunately the light came with (vague) instructions, and after shutting off the power and sticking a flashlight between my shoulder and chin, I undertook the nontrivial task of removing the old fixture and then wiring, placing, and screwing in the new fixture all by myself. Without drinking any coffee first.

And as you can see from the picture...I did it! It's so bright in there that you can't look above the mirror without suffering temporary blindness! And now I can find all the crusty shampoo-bottle rings that the previous owners left behind!

I'll post more pictures as other rooms approach some level of completeness, but here's a picture of what Zsa Zsa did during the first week. 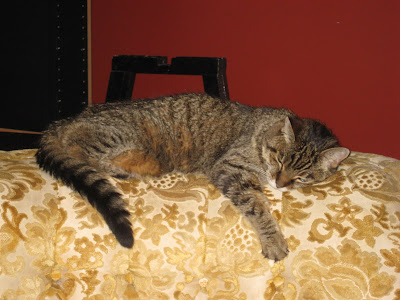 That's right, she sat on the back of that chair and hugged it for dear life. It was the only piece of comfy furniture I retained during the move, and even though she'd never cared for it in the old place...well, suddenly it became her bestest friend.
Posted by Adam Thornton at 7:22 AM