When menaced by the big-assed stuff of nightmares... 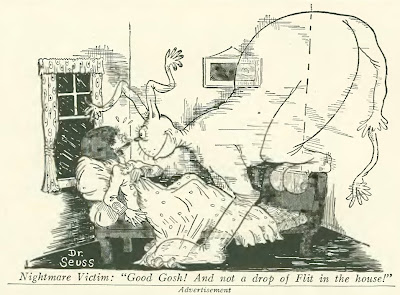 I'm a bit confused by the insignia on John Cleese's right cuff...is that a naval marking, or is was this just something about pajamas at the time?
Posted by Adam Thornton at 7:15 PM 4 comments:

The Voyage of HMCS Thumpy (Preview)

Some time ago I realized that even though social media networks provide a useful tool for spreading news around, very few people these days will actually click on an audio link. They'll click on an embedded YouTube clip, but hardly anybody bothers to listen to a linked audio file anymore.

Because I want people to listen to (and hopefully buy) my music, I decided to make videos for some of my songs. Unfortunately I suck at building sets and lighting them, and I don't have the money or organizational ability to make such things look good, and I prefer to do everything myself to avoid worries about compensation, vision, and shuffling everybody's timetables.

So I bought Anime Studio Pro 6.1. I figured I could make simple animations to illustrate my music, and for a starter I've been working on a new song called "The Voyage of HMCS Thumpy." Here's an early version of part two of the five-part project, made entirely with the cheaper "Debut" version of the product. Warning: turn down your speakers, it's loud.

One thing that I've learned is that I'm a more visually-creative person than I've given myself credit for. However terrible I was in my highschool art class, I have a pretty good sense of style and proportion once I've grasped my tools. You'll see that more when I've finished the full version.

Which brings me to another thing I've learned about animation: IT TAKES A LOT OF WORK. Having a sophisticated tool like Anime Studio is only a small part of what animation seems to be about: design decisions, subtle tricks, and endless tweaking of the smallest parts of your project. I thought this would be easy, and I was wrong; witness the extended blog silence. Every day and every night I'm working.

Regarding the tool itself, Anime Studio is brilliant. Its interface is annoying and it has some very frustrating bugs, but once you've mastered half of it your options are pretty much unlimited. The little video above barely scrapes the surface. Wait until you've animated a CHARACTER.

Ah yes, the third thing I've learned about animation is that there are certain tasks that everybody dreads, and the biggie is "The Walk Cycle." I've just implemented my first one and I think it's pretty damn good, but I still have a lot to learn.

Anyway, I hope you like the video, and maybe you'll choose to become an animation hobbyist. Maybe I will too. But just remember that even a mediocre result takes a lot of effort and creativity no matter how many spiffy tools you have.
Posted by Adam Thornton at 5:47 PM 5 comments: