I'm having a surprising amount of success resurrecting unfinished songs off my old eMac. Somehow, the roadblocks regarding these projects -- many of them begun in 2003 -- are easily being swept aside through judicious application of fresh ears, soft synths, and sledgehammer editing techniques.

The latest resurrected song is "Devil Woman!" You can listen to it here if you're so inclined. It's based around a sample from "Pelican & Penguin" by The Nits, with a lot of sequencing from the obsessive "Damage" era, plus...well, just give it a try.

If I continue to be happy and easy with these musty old songs then I plan to release them as "Sruel Quay," a collection of rescued projects. Someday...
Posted by Adam Thornton at 5:23 PM No comments:

Email ThisBlogThis!Share to TwitterShare to FacebookShare to Pinterest
Labels: coming up, UPhold 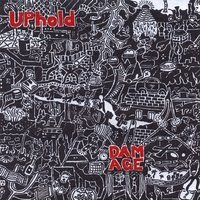 One of the things I've been doing lately -- instead of blogging -- has been to set up my 2007 CD "Damage" on CD Baby for distribution.

Woo-hoo, it's finally there, and it's very very cheap! You (and that's not "you" specifically, it's the "generic you") can go online and buy either the CD or the MP3s, and have a little bit of Muffy in your own home forever.

I warn you, though, that the CD was made during a particularly acerbic period of my life, when I'd decided it would be socially and emotionally beneficial to live excessively. "Damage" is the only wonderful thing that came out of that period, as it was recorded during moments of anguish, self-doubt, and obsessive twitchiness...and it's definitely apparent.

Still interested? It's here!
Posted by Adam Thornton at 9:11 AM No comments:

Johnniac, Sage, Enigma...the Computer History Museum is where I want to live.

Today I had planned to take a canoe trip down Guelph's Speed River, as part of the triumphant (possible) return of the Daily Muffy. Unfortunately the forecast rather sketchily called for afternoon thundershowers, and my trip organizer -- who is a professional canoe coach -- said "Lightning + Canoe = Death." And she didn't want to die just for a bunch of goofy photographs. We had to cancel.

So on a beautiful day, with the Co-op car booked and a totally free itinerary ahead of me, I decided to drive to New Hamburg and take my mom out for a surprise lunch.

And it worked! She hadn't eaten! We sat on the empty E.J.'s patio and ate pulled-pork sandwiches and talked about her trip to England. Then we took a long stroll around Baden -- which neither of us have ever walked around -- and chatted with children and played with a small dog. Then we went on the "Castle Kilbride" tour, which was quite beautiful, though I was disappointed we didn't get to REALLY see the basement. And I think that when I accidentally touched the tour guide's hand she thought I was groping her.

A side benefit of this wonderful day -- besides the joyful sponteneity of just making it up as we went along -- was the driving practice I got in. I'm becoming more comfortable with the car and am no longer white-knuckled when I drive it, and with each trip I become more thankful to the Grand River Car Share: they are professional, sensible, and they suit my lifestyle perfectly.

Sigh! Here's to a wonderful summer day! I don't have a "Daily Muffy" to show for it, but I think I ultimately got something better.
Posted by Adam Thornton at 5:29 PM 3 comments:

The Changeable Changeness of Change

The last three weeks have been bizarre. Nothing in particular has happened, nothing too shocking or surprising, but I can't help feeling that my world is moving pretty rapidly into a new place. What's surprising about this is that I'm pretty comfortable with the idea.

I've never really understood before the Tarot idea where the "Death" card actually means "change." I figured it was just a conceit to keep suburban housewives from screaming when they get their cards read. But when things are changing -- both your environment and you -- it really DOES feel a bit like death: a little bit scary and exciting and a whole lot of wondering.

Some things are going on that I'm not going to talk about here, and they're all interrelated so I can't give a full sense of what's happening on this end, but one of the cruxes involved is: how long am I going to continue doing drag? I've always known that there'd be a time when I'd want to stop, and I figured I'd just wake up one morning and say "No more!", but instead it's been a series of gradual waves of thought during the last few years. Every year I give the idea of quitting more serious consideration, and this year I'm really on the cusp of saying "Yeah, that's it."

Why? One reason is vanity. Each year it gets harder and harder to look good, and the failures are more and more apparent. The pictures of me which look attractive are taken from increasing distances. I keep thinking about the song that goes: "Nice legs, shame about the face," and all it takes is one terrible batch of photos to make me go "Ugh! No more!"

Another reason is reward versus effort, and the rewards are getting smaller. It's not that the WORLD has stopped rewarding me, it's just that those rewards mean less and less to me, and as the effort increases, doing drag starts to lose its point.

A third reason is the sheer pain of doing it. My shoulder isn't getting better and there's a possibility that it never actually will (I'm going to a shoulder specialist soon and will probably be scheduled for surgery). The ability to "look good" in drag involves having access to all those parts of your body that you need to modify, and I don't have access to some of those parts anymore. It's depressing and causes me a lot of anguish.

And finally, I've realized over the years that I'm GOOD at a large number of things, but I'm not GREAT at any of them (except for my job), and the reason is because I haven't focused all my money and energy on a single activity. "Doing drag" competes with all the other interests I have in my life.

But the thing is, drag is such a part of my identity that I've always been TERRIFIED of losing it. Who would I BE? This year, however, I can actually see myself doing without it, and I realize that my life would be a hell of a lot simpler and easier without it.

I'm not going to be one of those people who throws out all their drag stuff on a whim. If I do decide to stop doing drag, it'll be a gradual process, a "letting go." I'm still performing at next week's "OK2BME" Pride Prom, and today we were going to do a Daily Muffy (but it was canceled). What happens will depend entirely on where my life goes from here.

In any case, all this stuff is the major reason why I haven't been blogging lately. When my life becomes unsettled I tend to withdraw from creative pursuits (such as this one) and just do a lot of reading and game-playing (yes, The Sims 2).
Posted by Adam Thornton at 10:29 AM 2 comments: