I was originally going to write a great big entry about body image, but it's all been said before. I was also going to spit venom about the spoiled, stupid, doped-up brat that was Anna Nicole Smith, but somehow this doesn't seem to be the right time (though the chances of her reading my blog are pretty slim as of today).

So instead I'll just say that as a model she certainly had her moments, but as a ROLE-model she was thoroughly undesireable. She did make a dent in beauty stereotypes, but mostly because she just sort of tripped over her feet and bumped into it and not because she wanted to. The fashion industry just knocked the dent out again anyway.

I do think she was pretty, at times. If anything she served as an example of what highly-trained cosmeticians and stylists can do with a person's body, given enough money and enough time. 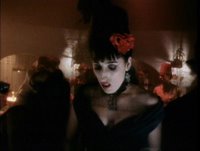 The above picture shows Anna Nicole in Bryan Ferry's video for "Will You Still Love Me Tomorrow." Since we're on the topic of beauty standards and Bryan Ferry, I present a picture of Rossy de Palma in the video for "I Put a Spell On You." The video is horrible but there's little doubt that Rossy is a far more unconventional beauty than Anna Nicole was, and she never stooped to a nose job either.
Posted by Adam Thornton at 5:26 PM

I feel sorry for Anna Nicole. She appears to have had an unfortuate upbringing which rendering her illequiped to deal with the barrage of sleeze-bag media hounds who were only interested in exploiting her stupidity at every corner. Dudes feeding her drug habit to keep her working and semi-controlled. Not that she didn't play into that for her own short sighted gratification, but I sense she did wasn't surrounded by a single true friend. Someone to say: "You are seriously fucking up. Go to rehab, or I'm calling child protective services. You can not handle this shit, so clean it up, already!"

So Anna, goodbye. And my smurf itches too.

My take on her is that if anybody HAD said "clean it up, already!" she'd have screamed and clawed at their eyes (or, considering the nature of her apparent friendships, just fired them).

For sure she would have had a tantrum and fired people. She was an addict. But if you call child protective services on her, then you've given her something to think about. And, if you recruit as many family/friends selfless enough to pressure her in to rehab, instead of being a bunch of dogs hanging around the table looking for scraps, she would have had more to think about. This may have helped, or not, but I suspect nobody even made a decent effort.

I certainly see your point. Personally, I have an unusually low tolerance for people -- like Anna Nicole -- who I believe are selfish, brainless, and self-destructive.

She may not have been those things, but I was never actually invited over for tea and Percodan.