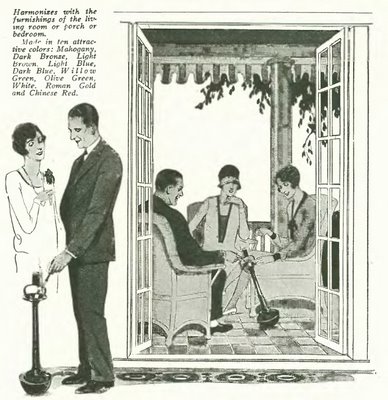 No, he's not rubbing a lit cigarette against this woman's wooden leg...he's using the Smokador, a product terminally advertised in the pages of The New Yorker! It's a tall ashtray with weighted bottom...tall enough for easy cigarette-snubbing, but balanced so it won't fall over when your guests bump into it (which happens a lot when they're drinking illegally-imported rubbing alcohol with a label on it that says "scotch.")

Even better you can place the Smokador in the center of a group of rebellious flappers, and they can easily tip it towards each other when they want to deposit their ashes. Not to mention that the column of the Smokador is hollow, so the ashes drop down into the base, supposedly creating a less smokey environment (or, I suspect, an environment in which the smoke just puffs out of the ashtray in a more stale and concentrated form).

A few weeks ago Vanilla commented that advertisements used to be wordier. As far as I can tell this was the case until the mid '60s, which was probably when advertisers realized that people really DO buy stuff ONLY because of the pretty girl, and not because of the overblown, deceptive hyperbole in the ads. This Smokador article is a prime example of wordy advertisements, telling us not just the exact composition the metal but also repeating -- several times -- where the unit is most conveniently paced (they do not, sadly, mention Madagascar as a placement option).

The advert is FAR too long to quote, but I do need to mention that the Smokador has a "patented roly-poly 'Rock-a-by' base."

Gimme one in Chinese Red, please!
Posted by Adam Thornton at 7:31 AM

The smokador was the next step after the dismal failure of the roly-poly spitador, which had the unfortunate tendency to go belly-up when hit with a well-aimed and enthusicastically delivered expectoration.

Going with the red is a wise choice, or else your langorous lemur might mistake the mahogany-shade smokador for a branch of the Madagascar baobob tree, wrapping his ringtail around it, with disastrous results to his equilibrium and your decor.

After thoroughly using and abusing me (and my roly-poly cuspador), the lemur went back home to "carry on" with one of the Madagascar rugby teams. So now I can re-decorate, without worry of any tragic "baobob tree" mistakes!