A few days ago I posted an impromptu distillation of William T. Vollmann's article about Madagascar ("The Jealous Ones"). I was struck by Vollmann's uncharacteristic dislike of pretty much everything he saw and everybody he met in that country (and I actually wrote the distillation before I'd gotten to the REALLY disturbing stuff).

What are the chances that somebody reading this blog is actually FROM Madagascar? It's a small world after all, and one reader made it clear that they didn't much like this characterization of their country.

Here at The Muffyblog we like to be fair to everybody except Anna Nicole Smith. Aware that I should never swallow somebody's viewpoint without independent verification I decided to learn what OTHER people have to say about Madagascar. I figured I'd find all sorts of websites warning travellers away from the country...but other than comments that it "isn't for everybody" and that you shouldn't walk around outside at night, I couldn't find a single Vollmann-style negative comment about rampant thievery or people getting ammonia sprayed in their eyes. Shock!

I trust Vollmann's characterizations but in this case he's outnumbered. I don't know the real story -- I'd have to actually GO there to find out -- but I can at least say that if other people find the country as unpleasant as Vollmann did, they either aren't posting reviews online or they didn't survive to tell the tale.

So in the spirit of Valentine's day -- and since I don't have Somebody Special of my own -- I decided that MADAGASCAR is my valentine. To prove it, here's a picture of me comparing my ring-legs to a ring-tail, next to the Lemur who loves me: 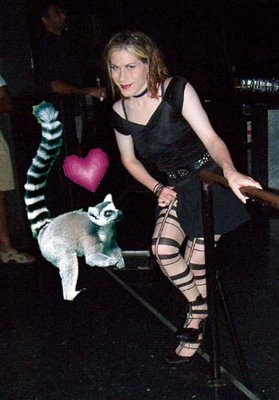 Posted by Adam Thornton at 7:09 PM

Email ThisBlogThis!Share to TwitterShare to FacebookShare to Pinterest
Labels: Madagascar

Fair enough. Madagascar not only has some awesome lemar action, but provides the world with the best vanilla beans and chocolate.

I'm sorry for your troubles Madagascar, and I'll send more love your way this Valentine's.

I love this quote from the Wikipedia article about Madagascar (AKA My Valentine):

"In the 1800's, it is said that members of the Mkodo tribe would sacrifice young women to man-eating trees, although some argue that these tales may be fabrications."

What...there may NOT be man-eating trees in Madagascar? Disillusion!

Man-eating trees don't eat young women - hence the fabrication. Young-women eating trees, however, are a different story. And people-eating trees aren't picky at all about gender.

I'm putting Madagascar on my "good thoughts" list this week.

From what I'm reading about Madagascar's biodiversity, I wouldn't be at all surprised to hear that there are picky-eating trees there!

Props to Greece, however, which had the very cool Kraken AND Gorgon. Woo!

Happy Valentine's day to you and your Lemur. ;)

Thanks d3! I figure we'll just take it easy and not make a big fuss. Maybe we'll watch a movie. It's too snowy outside for a lemur.

Do you guys realize how strange and bizarre you are in this blog. And I can't believe I'm commenting here…
Happy valentine's day
PS: that lemur is the mascot of my national rugby team

I found out that my Lemur wasinvolved with your rugby team...WHEN IT WAS TOO LATE! He told me about it the DAY AFTER Valentine's day, and then he packed his bags and he went home.

Apparently I was just a Valentine's day fling. But that's okay, I'm strong, I can find another Lemur anywhere in the world!

No, wait...they're only in Madagascar, aren't they? Sigh!

PS: To whoever sent me the ecard from "Lemurbuns," stop teasing my broken heart!