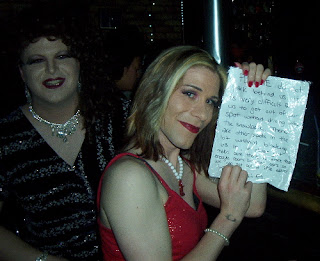 I think it's natural for human beings to feel persecuted. Rather than admit the random scariness of life -- random because life is so complex that we can't possibly predict it or make sense of it -- we prefer to interpret the bad events as some sort of persecution. What's more, if we believe that somebody else is deliberately hurting us, we by extension feel important enough to warrant the effort that goes into persecution, and we also feel superior to the people hurting us: we'd never be so nasty ourselves, would we?

Part of me likes to feel persecuted. Let's call that part "Beelzebaby." The OTHER part of me recognizes this tendency and, after objectively (or obsessively) reconsidering events under the influence of correct blood sugar, this part usually prevails. Since I'm so concerned about what other people think of me, I also have a tendency to analyze other people's motivations for doing things. And that helps me triumph over Beelzebaby once in a while.

I'm going to explain how this relates to My New Digs in a second, but first let me say that Beelzebaby serves another useful purpose: if I feel that other people in the world are stupid jerks who do stupid and mean-spirited things, by logical extension I can make myself a better person by NOT doing those stupid and mean-spirited things, right? The downside of this is that we ALL do stupid things, and due to the pervasive tendency for humans to think that evil motives lie behind stupid behaviour, OTHER people think we're doing MEAN-SPIRITED things too. So it's a losing situation in the long run but a little self-improvement never hurt anybody.

Let's get to the point of the story. My neighbours and I have a curious relationship in that we never really see each other -- our doors are on opposite sides of the building -- but we share a center wall that transmits (and perhaps even amplifies) sound. What's more, we also share a very small parking lot.

I don't drive a car but my friends do. Last Saturday I had a "mini-party" that involved a car being parked in the tiny lot. I didn't give my friends any parking instructions, and I didn't notice where they'd parked when they came into My New Digs, so for a few hours one of their cars was blocked in.

Later, when we piled into the car to go to Club Renaissance, we found a note attached to the windshield asking us to PLEASE be more careful next time. This is a sweet and gracious gesture, especially since the note was elaborately (and sort of hilariously) wrapped in Saran Wrap to keep it from getting wet. Being drunk and happy, my persecution complex didn't kick in and I assumed everything was A-OK, and later that night I left a (poorly wrapped) note in their doorway apologizing for the inconvenience and asking if their heat was working properly (since I'd fixed it a few weeks previous as mentioned in another entry).

I figured one of them would come over to accept my apology and/or respond to my heat inquiry, but neither of them did. My persecution complex kicked in: maybe they didn't like me? Maybe they took the parking lot issue more seriously than I did? Maybe they thought my reply was flippant, or thought I was making fun of their Saran Wrap?

On Wednesday afternoon I happened to run into Jenny ("call me K.C."), who said it was no problem and explained that her roommate's boyfriend was the one who got blocked in. She also said the heat was working again. Still Beelzebaby whispered in my ear that they don't like me, they've got a grudge against me...it's certainly true that they aren't "warm" to me. Maybe they don't like hearing Bob Hope at 8am any more than I like hearing them making dinner at 11pm. I'd love to be able to hash this stuff out with them, but that sort of thing is best done when drunk and our relationship isn't at that level.

On Thursday night I put my garbage out, and I also took the recycling bin to the curb. I think of this as my small samaritan duty, my willingness to take the recycling out, mainly because I get home from work earlier than they do. But the thing is, they never put anything into the bins...we have two of them near my back door, and I always fill one up but they never touch the other. Later that night they took their garbage out as well...

...and guess how they recycle? They stuffed all their plastic bottles and soup packets into a flimsy, open cardboard bouquet box, and just left it at the curb. Of course the recycling truck didn't pick it up, because (doesn't everybody know?) that they'll only pick up the official bins.

So Beelzebaby whispered in my ears again: your neighbours are irresponsible and dim-witted slobs. They don't even know how to recycle. And, what's more, two days later their bouquet box was STILL sitting in the snow at the curb, looking ugly and on the way to getting buried and frozen until somebody would have to deal with it in the Spring.

But then I stopped to think about it more: maybe they really DON'T know how to recycle? If not, would they be insulted if I left them another note? I didn't want to clean up their garbage myself because they'd never learn to do it themselves. Then I looked at the backyard through their eyes and realized: maybe they think BOTH recycling bins belong to me, since they're so close to my door? Maybe they did this because they're angry because they think that *I* stole the bins?

You see how the persecution complex gets out of hand.

So I decided the best thing to do was to take the second recycling bin, put their bouquet box and bottles into it, and leave it near their porch. That's my way of saying "this bin is yours, and you need to use it." I'm not trying to be condescending or vindictive. But K.C. surely has her own Beelzebaby. Will K.C. come out of her house today and say to her roommate, "oh, SOMEBODY'S leaving us a HINT, what a JERK"?

Postscript: This morning at 7am I was awoken by frantic pounding on my front door. It was Fedora Nerd, who lives in the other building which shares our parking lot. He asked if my car was blocking him in. I sent him next door. Eventually The Boyfriend sheepishly came outside and moved his car so Fedora Nerd could get out of the lot. Yes, this is the same guy whose girlfriend left me The Note last weekend. He'd done exactly the same thing.

My point? We tend to get riled up about other people doing stupid things, but at the same time overlook that we do exactly the same stupid things. Even if everybody does only one stupid thing a year, we see so many people every day that we're bound to see lots of stupid things happening, and therefore to assume that people are just stupid. Some of them are, certainly. But not all of them. And even when people do stupid things, they usually do them for reasons other than basic cruelty or stupidity.
Posted by Adam Thornton at 12:44 PM

I'd like to comment on this, but that might be a stupid thing, and if you don't answer it right away, then I'll think you don't like, or that part of me I call my inner cringing whiner will, so maybe I better not comment at all--other than to say if Proust wrote a blog, some of his comments might look like this one of yours, and thank God I own a house.

(Does Eric only comment because he thinks that, if he doesn't, I'll be offended? I'm offended that he hasn't commented to all my posts! The posts he hasn't commented on must be inferior. Or maybe he's passive aggressively directing the subjects of my posts?)

Should I read Proust? Would I become even more paranoid if I did?

Proust? Not paranoia per se but the desire and ability to dissect motivation into thinner and thinner slices until it becomes almost translucent and invisible to other observers. Unless that observer is Henry James.

during lunch at Subway