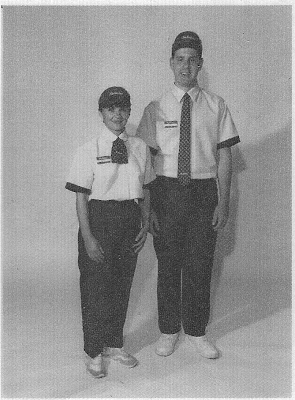 It goes without saying that serving customers at Tim Horton's was not an empowering job.

I worked there for five years between 1994 and 1999, and while the owners were fantastic and we usually had good managers, workers, and customers, a shift couldn't go by without some jerk trying to "put you in your place" (meaning, make you feel bad and inferior).

As a result we felt justified in empowering ourselves in passive-aggressive ways. The employee motto was "the customers are always right...except when they are wrong" and it was open season on evil, obnoxious, and greedy people.

I now present portraits of each type of person, and techniques of empowering yourself when confronted by them.

The evil people behaved with undisguised maliciousness. They'd come in angry about something that had happened to them at work, and they'd instantly try to mess you up by being intimidating or deliberately confusing. They wanted to find something to yell at you about, and if you weren't going to screw up accidentally they'd make sure you did it in some other way.

They'd order something, then say that they didn't order it. They'd claim that you shortchanged them, even though you didn't. They'd mumble their orders, then scream at you when you asked them to speak up. They'd watch you like a hawk and question your every move: "Did you wash your hands? When were the donuts made? I said I DID want a tray, aren't you listening to me? Do you want me to call your boss and complain about you?"

But the perfect weapon against these people was an equally evil smirk in response. Just as you couldn''t refuse to serve them because they were smirking, THEY couldn't complain that you were smirking BACK. I followed their orders, and I was always polite, but I'd SMIRK at them in the most obnoxious way, and they HATED that. I'm sure it spoiled all their fun.

Plus, you had nothing to fear from such people: if you were a good employee, you knew your manager wouldn't give such complaints a second thought. So when the evil customers pulled out their trump card -- "I'm going to talk to your manager" -- I'd always reply "She'll be in tomorrow at 9am...do you want me to write down our store number for you?"

Obnoxious customers behaved as though they were part of a performance called "entertaining everybody at Tim Horton's." They'd crack annoying jokes or ask you "funny questions." They'd put on a big show of deciding what to order. What they considered to be entertainment was what other people called "a waste of time."

There was a kid who used to come in who we called "The Orange Drink Kid." He'd always say he wanted an "orange drink," and when you tried to clarify -- "you want a peach drink, right?" -- he'd say "no, I want whatever's orange-coloured." He would pick out his twenty timbits one at a time, giving a running commentary on each decision. He'd ask for HALF of a timbit, or say stuff like "How many can I get for 83.25 cents?"

Obnoxious customers weren't just annoying to the staff, they were annoying to EVERYBODY. So you could very easily be rude to them and refuse to put up with their crap. It helped that they tended to do the same routine every time, so you could be prepared: "We don't serve anything called 'orange drink,' so look at the menu and call me when you can name what you want." You could just walk away from them and leave them chuckling to themselves, or you could bypass them entirely and take the next customer until they got hungry enough to stop acting stupid.

A subset of obnoxious customers were those who'd bypass the speaker and drive right to the drive-thru window to order. Drive-thru had to be done in a rigid way because it could so easily go haywire, so a person who just decided to order at the window was potentially screwing you up.

It was easy to deal with these people: you pretended not to see them. You'd hear them "ding" at the speaker and then you'd hear their car speed off, giving you time to quickly run to a part of the store where they couldn't see you. Then you'd amuse yourself serving other customers, doing dishes, or sweeping the floor. After a few minutes you'd come back and pretend to notice the furious guy at the drive-thru window, and if he complained you could say "since you didn't order at the speaker, I assumed you drove off." This was IRONCLAD.

The Greedy people wanted something for free; they wanted to bypass the rules. They knew that bagels could not be microwaved or sliced and still be purchased at "bulk bagel" prices, and they knew that they couldn't get a raisin tea biscuit instead of a plain tea biscuit with their soup deals.

But they'd ask for this stuff anyway, and then act surprised and offended when you refused. They assumed that by making enough of a stink you would eventually just give in.

The key to dealing with these people was to know the rules, know the situation, and know your manager. If you were 100% certain that the people were breaking the rules, and the situation offered you some free time to argue about it, and if you knew your manager would back you up, you could have SO MUCH FUN simply refusing. You had to be polite, but also firm, without any waffling: no, I can't do that, it's against the rules. No.

If your manager was a wimp or there was a huge line-up, though, you'd have to give in.

Another type of greedy person was the one who'd order something, take it away, and then hand it back to you and say "actually, can I trade this in and get something else?" The rules said you had to obey, but it was fun to shame them publically anyway. You'd take the food out of their hand and then dramatically throw it into the garbage, and everybody would gasp. Then you'd politely hand them their next item of food as they sputtered "I didn't think you'd throw it away!"

We had to throw it away. And we threw everything out at night anyway. But it was GREAT fun to make them look like they were snatching the food from starving third-world children.

It always surprises me that customers will be unpleasant to the people who prepare their food. They know what is freshest, and -- if you're particularly nasty -- they can spit in your drinks. You might think that, just because they're standing in front of you, they can't get a foreign substance into your coffee...but what if they rub their finger in something gross, then stick their finger into the coffee while they stir it?

I did spit in coffee, but only once, for a particularly evil regular customer. Otherwise I was always sure not to muck with people's food.

But here's the most important thing to remember: if you're nice to the servers, and they see you enough, you may start to get deals: the freshest coffee, free stuff, and little bits of rule bending. I was very happy to slice the bulk bagels for NICE customers...but you always needed to warn them, otherwise they'd come back and say "Why won't you do it for me? That OTHER person always does!"
Posted by Adam Thornton at 7:18 PM

And I thought I was pathetic for wanting semi-anonymous people on the internet to react to me. :)

I am (of course!) talking about the customers. :)

Awww, most of the customers were good, of course. But it's the bad ones that immediately come to mind.

I hope every asshole customer reads this blog. We know your secret assholes! And it makes you pathetic. Your secret is that in the rest of your life, your family and co-workers find you as annoying and tiresome as customer service workers. And we know that you otherwise disempowered wankers exploit the purchase of a $1.50 coffee to redress a slew of personal inadequacies. So there, bastards.

Yes, and if you make it a habit to treat service people like dirt, make sure to inspect your food carefully before you put it in your mouth.

Good point about the family members of evil customers. It was not uncommon for the associates of a ranting customer to be even more disturbed than the employees.

I worked at the Taco Bell on University and Weber for 3 years.

You really don't wanna know how easy it is to do something awful to your food if you get too prickish.

I feel your pain, Scott!