A Scary Movie For You: "Creep" 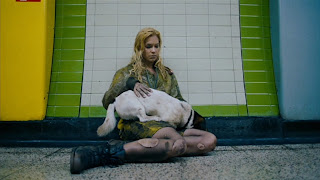 Oh, and Happy New Year, by the way.

I'm always on the lookout for a good scary movie. Most of the ones I choose are either bad Japanese or Spanish "style before substance" films ("somethin' weird is going on, but who knows why?"), but occasionally -- VERY occasionally -- I run across a gem.

Yeah, I get thrilled by movies about people exploring underground passageways. And dialog ALWAYS sounds less cheesy when the actors are British. But this is EXACTLY the sort of movie I love: realistic characters running around in real time, dealing with a totally logical menace. Plus gore and humour and beautiful cinematography. It's "Texas Chainsaw Massacre" reconfigured. And I mean the original, film, the GOOD one. Creepy, creepy, creepy.

Freaked me out. Upset me. Good movie.

Bonus! Another film that may or may not be good.

"Dreamcatcher" ... So, what did this have to do with "Dreamcatchers," again? And why is Donnie Walhberg saying "Oooby-ooby-doo" at me? Oh yeah, it's a Stephen King movie. The back story sounds uncomfortably "It"-ish, but the messed-up alien story is incredibly WOW. I bought the book. I don't want to read about little kids bonding. I want to read about fungus growing on people's faces. Shiver. Memo to King.
Posted by Adam Thornton at 3:09 AM

Wasn't too big on Dreamcatcher, the movie. I couldn't even tell you why at this point, it's resolution seemed all too convenient? I dunno. I've heard good things about The Mist, but will wait for the DVD.

I will definitely check out Creep.

Yes, you read that right. The ending is 300 pages long.

But at least the Downs Syndrome child didn't turn out to be an alien superhero. And the aliens themselves were MUCH creepier.