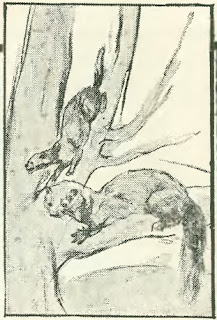 It still shocks me, digging through the feminine duds in an antique store, to come across a small gutted mammal with its head and feet still intact. I can't reconcile these gruesome puppets with the fashion accessories they once were, rakishly hanging around a rich lady's neck with dead paws a-dangling.

In the pre-guilt days of fur coats it seems that few people were concerned about the ethics -- not to mention the taste -- of such things. And once in a while (in the July 21, 1928 issue of The New Yorker) you run across a cute fantasy that portrays the animals as somehow ENJOYING the process of being trapped, killed, skinned, and carted out for tea:

THE MINK -- is only at home in the forest -- until immortalized in a Russeks Mink Coat. Then he forgets his wildwood wanderings, becomes sophisticated, and wouldn't recognize a muskrat if he met it in the same Rolls Royce.

This ad for Russeks Fifth Avenue makes me think of a lyric that's always equally delighted and baffled me, from the film "The Opposite Sex":

Why do mink--
(Yes, why DO mink?)
willingly let themselves get trapped?

The song goes on to say that mink allow themselves to get trapped "for the opposite sex," which could also explain why frogs (yes, why frogs?) willingly let themselves get run over on the highway. At least frogs are doing it the opposite sex of their own species.

You know what? Fur coats ARE absolutely beautiful and I swoon in their presence. But somehow I don't think I could bring myself to buy a new one, and even if I did I don't think I could ever wear it, which certainly defeats the purpose of having one. I DO have a totally utilitarian bear-skin muff, but I never use it because not even a bear can encompass all the crap I carry around with me.
Posted by Adam Thornton at 9:54 AM