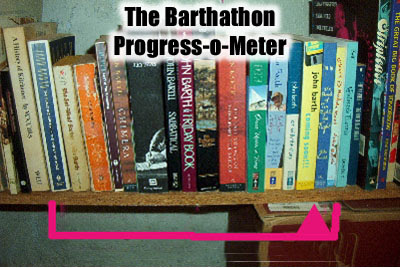 In "LETTERS," John Barth gave us -- among other things -- a struggle between his own media (literature) and the media he felt threatened most by at the time (film). The Ambrose Mensch Barth-surrogate character was constantly struggling with avant-garde film director Reg Prinz, who had utter contempt for words and wanted only to deal with images. Who won the struggle in the end? That's impossible to say, what with all the explosions and the mass-impregnating bug monster.

In "Coming Soon!!!" (2001), Barth seems worried about a newly threatening trend: hypertext fiction. The "Novelist Emeritus" Barth-surrogate character is constantly struggling with e-fiction author Hop Johnson (the "Novelist Aspirant"), who has utter contempt for the linearity of "p-fiction." Hop and Barth compete to see who can be first to finish their respective versions of "Coming Soon!!!", writing both in their own styles and also parodying each other's styles. Soon the novels are cross-pollinating, plot twists are introduced and then defeated, the battle between Aspirant and Emeritus is joined.

Sounds like a great idea, doesn't it? So why does the book SUCK?

I tried to read "Coming Soon!!!" back in 2004 (I know the date because a receipt for "Quiznos Subs" was tucked inside for a bookmark) and I put it down shortly into the second part: I thought it was stupid and annoying. Now, with a greater grasp of Barth's concepts and a greater knowledge of literary criticism in general, I can say...it's STILL stupid and annoying, though partly for different reasons.

You see, I already know most of Barth's tricks by now. I know about his wordplay and his tropical storms and his author-writing-about-the-future-as-the-future-catches-up-with-him stuff. I know this because he's performed these same tricks in every book since 1972 ("Chimera"). His old tricks are boring -- and insufferable due to their dull repetition -- and very little is new in "Coming Soon!!!"

To make this totally painful, the character with the most obnoxious speech pattern -- Hop Johnson -- is the co-narrator. And since all of Barth's books are 99% exposition, we're left to wade through paragraph after paragraph of totally unappetizing crap like this:

And so the search went on for a dramatic chef d' ouevre to follow the Follies: a search that Narrator right readily joined out of his growing general commitment to TOFO II and, more particularly, his ongoing lustful fascinadmiration withof Ms. SMcAS. (What made the woman who Made It Hop tick? How could so multitalented and physically striking an all-'round wowser futz her life away in D'town-on-Ch'tank, aboard funky floundering T II, and in occasional bed with no better than the likes of Yrs T -- and, maybe, Cap'n Elva K?)

The subject of these paragraphs is Ms. Sherry McAndy Singer, she of "those eyes those eyes," the Barth-typical slim, gorgeous, intelligent, talented, take-it-up-the-butt, terminally menstruating, "scarred-by-abusive childhood" female lead who -- you guessed it -- BECOMES SCHEHERAZADE!!! Because we all know that Scheherazade is the most sexiest, admirable, and resonant literary character ever-ever-ever, so resonant in fact that Hop -- who has no interest in traditional literature -- wants to name his daughter after Scheherazade's resilient, equally-resonant, sooper-coolinest and no-doubt-sexy younger sister.

You know how much I hate all this.

So you've got two narrators doing their level-best to out-annoy the reader. You've got the usual handful of Barth character traits (the earthy lesbians, the Jewish characters who pepper their speech with stuff like "they're all meshuggenehs!"). You've got at least thirty pages devoted to blow-by-blow descriptions of the minutiae of sailing, which we've already read a hundred times before. You've got many, many more pages devoted to blow-by-blow descriptions of the scriptwriting and show-planning activities of a bunch of annoying horndogs on a boat...who we only know are talented because the narrator says "wow, they're talented!" You've got Barth and his sexy, coolinest, sadly-not-Scheherazade wife...sailing around...again. You've even got Barth stretching his offensively tin dialect ear beyond mere Jewishisms and into cockney, Italian slang, watered-down ebonics, and tidewater y'all-ing.

"Coming Soon!!!" is an obnoxious, go-nowhere mishmash of nothing. It's boring. It's self-indulgent. It's the same-old. I am losing faith.

Is there anything GOOD about the book? Only the mildly interesting battle between the Aspirant and Emeritus, which sputters in and out of the plot before fizzling entirely near the end. It's interesting to note that Reg Prinz and Ambrose Mensch never resolved their film/lit conflict, but Barth's p-fiction beats Hop's e-fiction hands down.
Posted by Adam Thornton at 9:22 PM