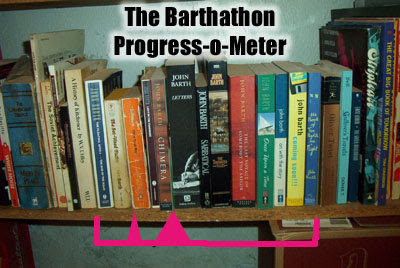 John Barth wrote "The Sot-Weed Factor," and was shocked when critics pointed out that the journey of the book's hero (Ebenezer Cooke) was strikingly similar to the "pattern," as outlined by scholars such as Joseph Campbell, which mythic heroes always follow. Intrigued, Barth wrote "Giles, Goat Boy, or, The Revised New Syllabus" (a conscious adaptation of "the pattern"), showed his increasing interest in mythology with parts of "Lost in the Funhouse" ("Menelaiad," "Anonymiad"), and then stuck both feet right into the Grecian heroic pattern in "Chimera" (1972).

You don't need to read a Barth biography to find these things out...you simply need to fight your way through Chimera's closing novella ("Bellerophoniad"), in the middle of which Barth himself (or rather, a sort of "interview with Barth") appears, where he talks candidly about his attempts to distill the heroic myth into a single story (ending up with rejects such as "The End of the Road Continued," "Sot-Weed Redivivus," "Son of Giles, or, the Revised New Revised New Syllabus") before finally writing the three novellas in "Chimera." He also talks a bit about "Letters" his next book, which I look forward to reading soon.

Barth gets away with this intrusion -- as well as the intrusion of "Jerome B. Bray" from "Giles, Goat Boy" -- because "Bellerophoniad" is, among other things, a piece of meta-writing...it's a story that knows it's a story. As a matter of fact, it is ACTUALLY the final incarnation of Polyeidus, a shape-shifting seer from within the story itself who tends, unwittingly, to turn into historical documents, a particularly strange and useless talent in the pre-literate days of the mythical Gods. Unless you're writing a book about them.

What's more, mythology in the real world is a remarkably fluid and often contradictory thing. We have only fragments of tales from wildly different ages and regions, in which the same heroes -- including the subjects of Chimera, Bellerophon and Perseus -- do dramatically different things. Ultimately, not even the heroes themselves know who they are anymore. Was Medusa good or evil? Was Bellerus the son of a God, and which children did he father? Who the heck were the Amazons, anyway?

Through all the soul-and-pattern-seeking of Bellerus and Perseus -- suffering mid-life crises in the second half of their heroic patterns -- is the first airing of a new Barth obsession: literate, witty, married adults trying desperately to understand each other. This happened a bit in "Menelaid," but here it gets the full Barthian treatment: man and woman lie around discussing sexuality, love, and committment, always in a wordy, cute, sensitive, and sexually explicit way. Emphasis on "cute."

Often, in Barth's books, these discussions sound like confessional debates between Phil Donohue and a first-year Woman's Study major...but just as you're about to break into a terrible rash, the female character will jump out of the story and yell, "that doesn't sound like me at all! Women don't really talk like that!" at which time Barth himself (or some Greek-hero Barth-surrigate) will admit that he doesn't really understand how women feel...but he's trying.

And I think the world can love him for that, even if we feel a little sick afterward.

Anyway, "Perseid" is the story of a mythic hero trying to find his pattern in hindsight, while "Bellerophoniad" is a mythic hero wannabe trying to conform to the pattern in advance, with disasterous results. The first story -- "Dunyazadiad" is about Barth himself visiting Scheherazade and learning that "the key to the treasure IS the treasure," which keeps on coming up in his books and may mean (in plain english) that while fictional characters spend entire books doing deeds in order to find a treasure at the end, the REAL treasure (for the reader) are the deeds themselves; the reader doesn't care about the stash of gold at the end of the book, the reader is more concerned with the adventure leading up to it. Or something like that.

"Chimera" is not particularly readable, and even though the Perseus and Bellerophon myths are explained within their respective stories, the explanations come in the MIDDLE of the stories and are (due to everything I've already mentioned) incredibly muddled. So brush up on your gods and heroes before diving in. Barth seems to have let his "rollicking adventure" mandate slide this time, giving us what are basically longer versions of his "Lost in the Funhouse" experiments (though "Bellerophoniad"'s use of contemporary slang and references is always good for a laugh, and you've just got to love Pegasus).

More Barth obsessions here: the marshes of Maryland, the fear of impotence, and sibling rivalry. Right out of "Water-Message" and "Anonymiad" (from "Lost in the Funhouse") comes two things we'll be seeing a lot more of in the future: bottled messages and that overgrown triangle of Tidewater marsh where the protagonist may or may not have had His First Sexual Experience.

Note: I was planning to skip "Giles, Goat Boy" because I read it recently, but I'm realizing how perfectly it fits into Barth's OWN pattern, so I'm jumping back to read it next. That's why there are TWO triangles in the Progress-o-Meter, above.
Posted by Adam Thornton at 6:17 PM