The Barthathon: "Lost in the Funhouse" 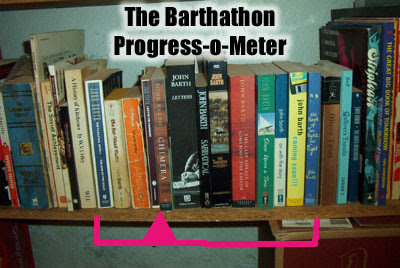 Ahh, homecoming. This was the first Barth book I read so, at the time, I couldn't view it within the context of his other work. Now I think I can, and -- what's more -- I can appreciate how insecure it made me feel about fiction in general (and why).

While Barth's books were growing more self-aware and unconventional, the collection of stories in "Lost in the Funhouse" (1968) allowed him to overtly play with the form and become downright (sometimes annoyingly) postmodern. Temporarily free from the constraints of the novel, he could experiment, not just with chapters or occasional concepts here and there, but with a selection of short stories. A new idea in each story, explored from beginning to end. And maybe with some kind of coherent idea throughout?

Some of the fiction in "Lost in the Funhouse" is straight-forward, showing us what Barth was moving away from (and what he was still in love with). "Night Sea Journey," with its apt, exacting, philosophical nature-of-creation and nature-of-being meditations (with a profound twist) introduces us eventually to Ambrose, who we assume will be a major character in the stories that follow. But after a naturalistic, straight-forward "early years" portrait of his life, things begin to veer off-track.

If, as you read the book, you continue to view "Lost in the Funhouse" as Ambrose's life-cycle, you must assume that most of the subsequent stories are Ambroses' own musings about literature, writing, creation, mythology, and personality. Another interpretation is that the stories themselves become "Lost in the Funhouse," exactly the way Ambrose does in the title story: the biography of Ambrose cannot be completed, especially not in a traditional way. There are too many concerns and too many things that cannot be said.

If I'm going to be a fictional character G declared to himself I want to be in a rousing good yarn as they say, not some piece of avant-garde preciousness. I want passion and bravura action in my plot, heroes I can admire, heroines I can love, memorable speeches, colorful accessory characters, poetical language.

Barth doesn't give us many rousing good yarns in this book -- it's an exploration of possibilities and worries, not a "story" in a traditional sense -- but the last two stories bring us adventure in the form of mythology, and they're the first time Barth REALLY wallows in his love of the deeds of Grecian gods and heroes. "Anonymiad" is the minstrel/author, scuttled on an island, composing (and compromising) his epic and sending it out to sea in bottles. Barth loves these bottled story-messages, tiny snatches of a larger fiction that arrive without context (or with a misleading context) which must be interpreted by a distant and random reader who knows nothing of the author. He'll do this again and again in his later work.

The other rousing good yarn he gives us is "Menelaiad," which is SIMULTANEOUSLY a piece of avant-garde preciousness: seven tales embedded within the narrative of each preceeding tale, complete with nested quotes...and nested seers. And since seers can see the future, they are capable of communicating with future listeners, which makes for some very strange (and funny) dialog. That Helen is a participant in three of these dialogs -- at three different times during the events narrated -- makes things particularly weird. Here's a sample:

"'"'"Then Odysseus disappeared and I was alone with topless Helen. My sword still stood to lop her as she bent over Deiphobus. When he was done dying she rose and with one hand (the other held her waisted sheet) cupped her breast for swording."'"

The very nature of written dialog and recitation comes into question -- since Menelaus was telling the story, in his own voice (obviously), how was it possible that the characters he quoted were actually speaking in his voice? And since one of those characters (Proteus) was a shape-shifter, and Menelaus spoke his lines in his own voice, couldn't it be that Proteus WAS Menelaus, or had at least taken his form?

I hated this story the first time I read it, but I love it now, and I think it's the second-richest part of the entire book. If you need some guidance and background, here's a diagram of the nested dialog, and also a brief history and context of the Menelaus myth. I survived without those aids, however, and if you read carefully, you can too.

The real glory of the book, of course, is the title story. It was my introduction to John Barth and probably the most maddening, significant, and beautiful thing he's ever written. Ambrose (remember him?) gets lost in a funhouse during a trip to Ocean Beach...while everybody else went through the right door, he must have stumbled upon the WRONG door, which, instead of leading him down the simple and prearranged path, has dumped him into the endless corridors and inner workings of the funhouse itself.

This alone is an interesting, gripping, and well-written story...but the author (Ambrose as well?) has ALSO gotten lost, this time in the "funhouse" of story-writing. He shows us the inner workings of his plot, and explains how and why his plot is not entirely functional. Unable to find the exit -- or even the proper, simple path -- he gets lost in extraneous details, superfluous characters, possibilities of presentation...how much information is too much information? When do all these details become dysfunctional noise? We learn the richness of Ambrose's (and the author's) personalities, but we also come no closer to the exit, the ending. The author, in fact, is practically mourning his ability to see the inner, hidden workings of the story; with an understanding of all these possibilities, how can he ever write a proper tale and finally exit the funhouse?

My thoughts exactly. I don't know the answer, but I do know that when you've finished the book and closed it and put it back on your self, it's finished. An exit of sorts. And you'll be richer for the experience of reading it.
Posted by Adam Thornton at 8:47 AM

Um, Oliver Twist says that even though he was saved by Nancy, a hooker-with-a-heart-of-gold, he feels uncomfortable being so close to "Striptease."

Your copy of SWF is, as I suspected, the one I had to abandon for a more reader-friendly version.

Your argument about LIF is so persuasive I find my hand stealing towards . . . no, I've got another huge work I want to finish before classes start. Maybe after that.

And again I encourage you to check out Steven Millhauser--he builds on the achievements of Barth, Nabokov, and Borges.

You have the eyes of Superman! But don't worry, Oliver...you have Jonathan Swift and Fritz Leiber to protect you. And NOBODY can get through Swift. I couldn't, at least.

Leiber Sr.'s most extended role is in the Ronald Colman "Tale of Two Cities," in which he assassinates Basil Rathbone. Wonderful old ham. His son tried to be an actor--and a minister--before he settled to writing fantasy & sf.

Ah, the Fritzes Lang and Leiber. I didn't know about Leiber's dad. I've only dabbled with Fritz Leiber's writing; he a selection of long, literate, and very stange horror fiction, and I picked up "Conjure Wife" out of curiosity (fantastic!)

I hate to keep pulling these movies out of my . . . hat, but "Conjure Wife," which I also love, has been made into two movies, one of which, "Burn, Witch, Burn," I saw on its first release in 1962. It was made in England, and the UK title is "Night of the Eagle." Its chiefly British cast includes Peter Wyngarde, who, synchronicitously, starred in the Emma Peel "Avengers" episode "Touch of Brimstone"--the only Avengers episode originally banned in the U.S. Emma as the "Queen of Sin" is a fevered dream of Sacher-Masoch's--three-inch dog-collar spikes!

The other version of CW I had never heard about--it's called "Weird Woman" and was one of Universal's "Inner Sanctum" mysteries of the 1940s, all of which starred Lon Chaney, Jr. I about fell out of my chair when, watching the DVD, I realized what this was based on.