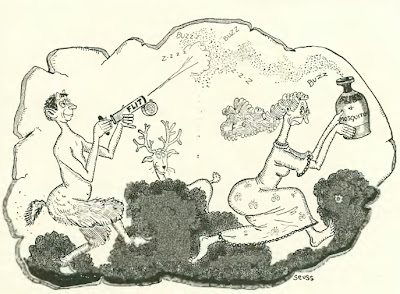 Before devoting himself to sheer fancy, Dr. Seuss was a minor sort of anthropologist. Here's what he uncovers in the June 30, 1928 New Yorker.

The above photograph was found in recent excavations under the city of Rome. Noted archaeologists say it is from the Sunday Roto Section of Rome Graphic, and appeared in B. C. 1073. The picture depicts that sly satyr Flit undoing the work of the unpleasant goddess Insecta.

Why a "photograph" instead of a pot shard or something? I honestly don't know; it wasn't like newspaper photographs were anything new in 1928, though they may have been part of a controversy around this time. Just a few issues previous, Morris Markey had done an expose of unsavoury newspaper photographers (which meant all of them, according to Markey), and especially their photo-manipulation techniques: it was common at the turn of the century, apparently, for photographers to use photo tricks to raise the hems of ladies' skirts and -- gasp! -- draw in fake ankles!

Still, the advert's pointed mention of a newspaper photograph is a mystery akin to "why does Insecta wear a housecoat?"
Posted by Adam Thornton at 7:41 AM