Cartoon Confusion Due to Midget Punchline 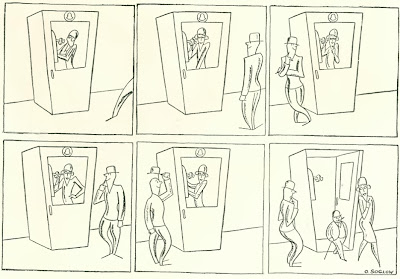 New Yorker cartoons are infamously opaque, but they weren't much so during the 1920s. The multi-panel vignettes by Otto Soglow were particularly easy to "get," usually a simple, surreal, but obvious joke stretched out to six or nine panels.

But this one confuses me and freaks me out. Sure I understand what is happening in each panel, but there's a disconnect between "what appears to be happening" and "what it all means." Part of this confusion comes from my desire to NOT see it as a cheap midget-with-a-cigar-sex-gag, because New Yorker cartoons -- and Soglow's in particular -- just weren't LIKE that at the time.

It says something about the vapidity of the '20s magazine that this cartoon is the most thought-provoking thing I've seen so far.

Incidentally, you may remember Otto Soglow for what he eventually became famous for: the 1930s "Little King" comics.
Posted by Adam Thornton at 9:46 AM

I think I get it. An onlooker is admiring a seemingly single woman. As he waits to use the phone, he contemplates his attraction to her, maybe even approaching her for a date. But, she is not alone. He did not anticipate her having a companion, and by virtue of being short, his presence was blocked by a partition. His intentions were then staunched by her unexpected and unlikely pairing with a midget. Aaah, ha-ha-ha!

I think you're right, Vanilla, and the midget's prominent cigar MIGHT be simply a reflection of the common sideshow midget conceit: contrasting the small size of the man with some hyper-masculine props (soldier's uniform, tarzan outfit, businessman's suit, big bowler hat, big cigar).

Thanks for the plain vanilla version, er vanillaj! My mind is so far down the gutter that I too could only see the perverted explaination of the tagline.

P.S. Thanks for the cartoon. I do remember the Lil King Cartoons.

And after a careful look at the cartoon, you nailed it deadon!

I'd like to hire Vanilla as my "official cartoon analyzer," but I don't have any money...