The Barthathon "Where Three Roads Meet" 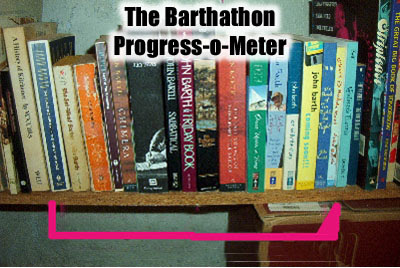 Okay, the Barthathon is finished. I'll wrap it up at the end of this post, but I've already said pretty much everything that I have to say about John Barth and his writing.

I'll admit up-front that I couldn't wait to FINISH "Where Three Roads Meet" (2005) before I'd even STARTED it. What began as a joy back in July -- reading all of Barths books in chronological order -- had become a painful chore, and one that I wasn't getting anything out of except lessons in what NOT to do when writing fiction, and also shooting pains in my esophagus.

So I am totally unable to view "Where Three Roads Meet" in any sort of objective fashion, other than to snarkily tell you about the game I invented.

I call this game "What Sort of Crap Will John Barth Throw At Me This Time?" To play it, write a list of all the stereotypically overdone Barthian themes you can think of (excluding ones explicitly stated on the jacket write-up, like the "Ur-Myth" in this case), and then jot down when each theme appears. When you have discovered all but ten themes, rip the book in half.

Feel free to play this game yourself. Here's my tally, with the page numbers they first appear on:
I admit that thirteen of those themes are ones that I hadn't thought about beforehand, and only noticed when I came across them. I include them in exchange for all the other themes I DIDN'T include, basically because my writing hand was getting tired.

Did I rip the book in half? No, because it didn't contain sailing, a trip to Spain, a youthful tragic sexual experience, a declaration that "we're fortunate to be this age, in these circumstances, in this country", any of Barth's Chesapeake scenery (loblolly pines, Canadian geese, spartina), a water message, a detailed list of a character's prior residences, cute pillow-talk, meditations on The End of Literature, an increasingly impotent older male, a character who is obviously Shelly, Zeno's paradox, the "coastline measurement" stuff, or a time paradox involving writing.

Which means that, wow, this book is BREAKING NEW GROUND!

So, should you read John Barth? Yes, you certainly should. Ping-pong back and forth between his works, making sure not to read any that were published consecutively (with the exception of "Sabbatical" and "Tidewater Tales," which should be read "as a whole).

Also, perhaps, find it in your heart to love the old guy a bit. Someday I'll be able to do that...but not now.

On with the (different) story!
Posted by Adam Thornton at 9:32 AM

I enjoyed reading your Barthathon. I've become very enamored of John Barth, but then again I'm not reading his books in order and as of yet I've only read 4 of his novels plus his 2 essay collections (with all of the fiction being from the earlier, and apparently more celebrated, portion of his career). I have identified some of the same things, that you mentioned, which could becoming irritating if one were to do nothing but read his books...

Would you agree that there's some sort of midpoint in his career where quality drops of (say, after Letters), or is that not necessarily a fair assessment?

Enjoy the books! Hopefully my expose won't colour your opinion much.

My recommendation is to ping-pong back and forth between pre- and post-Sabbatical works to make the lack of variety less noticeable, and to read other things in between. I'd say all the books are worthwhile in their own right (with the exception of "Coming Soon!")