The Barthathon: "The Book of Ten Nights and a Night" 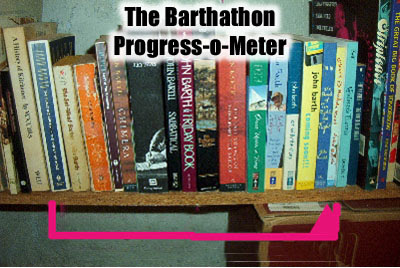 I've said it before, I'm saying it again: Barth fans, DO NOT READ ALL OF HIS BOOKS IN SEQUENCE.

You might say that this should apply to ALL authors, not just John Barth. If I had been doing a "Pynchon-athon" or a "Coover-athon" or a "Janowitz-athon," would I not be in the same state by this time, cursing the author's stylistic and creative shortcomings?

Maybe, but probably not to this extreme. Barth's wincingly-bad flaws involve a combination of three things: an obsession with themes that he has already explored ad nauseum, an expository writing style in which the narrator is constantly explaining events (always in exactly the same way), and an extremely narrow range of characterization.

This becomes most painful in "The Book of Ten Nights and a Night" (2004), because its eleven collected stories are rapid-fire, compressed examples of Barthy-badness which -- due to their quick repetition -- drown out the good stuff that is supposedly the point.

The first two stories are the oldest tales and so, unsurprisingly, are the also the best...they pre-date his locked-in style. "Help!" is a funny, moving, wildly experimental representation of a musical composition, and "Landscape: The Eastern Shore" is a refreshing taste of Barth's modernist writing: a good story told well.

But as you read the subsequent stories you -- winding up an exhausting Barthathon -- begin to realize that Barth has done exactly the same "things" in every piece he's written since the '70s, and as you continue to read you start to make a game of predicting what will happen next, AND YOU ARE ALWAYS RIGHT.

Each story will:
As fun as it is to constantly "win" while playing this game, it's actually beginning to make me ANGRY. I cannot BELIEVE that a professional can WRITE like this...ESPECIALLY not a person who spent most of his life TEACHING CREATIVE WRITING.

What is PARTICULARLY amusing (and heartburn-inducing) is that the stories are punctuated by conversations between the storyteller and the obligatory "Super Coolinest Barth Female," in which she keeps imposing conditions to PREVENT him from becoming repetitious -- no more stories about infidelity, no more stories about authors -- and yet she never once addresses the REAL reptition: no more expository stories, structured identically, starring identical characters who differ only in name.

This means that Barth retains a healthy criticism about SOME of his writing, but somehow the REALLY bad stuff escapes his notice (or he doesn't care to address it).

The final REALLY REALLY amusing (and headache-inducing) moment is the last story, which is ONE LONG INFODUMP about the aforementioned Super Coolinest Barth Female. I knew what was coming from the very beginning: she's the child of upper-class professionals? Yup. Strange obsession with Jewish culture? Yup. Traumatically sodomized as a teenager? Of course! Intelligent, literate, thin, beautiful, high sex-drive, attracted to her professor, terminally damaged but still functional and therefore worthy of immense respect? You got it! All that's missing is a lesbian affair, a sailboat, and the revelation that she's a metaphorical Scheherazade.

(She can't be Scheherazade, you see, because in this case that part is being played by John Barth himself, and not even HE can work TWO Scheherazades into a plot...yet).

Do I sound snarky? YOU sit down and read his books, all in a row, and tell me what YOU discover. What *I* have discovered is a writer with terrific ideas who, just before the middle of his career, became increasingly obsessed with themes that he has since milked dry, and who long ago stopped giving a damn about his writing style and his characters.

I've also discovered that fiction can make me emotional, for all the wrong reasons.
Posted by Adam Thornton at 8:28 PM

Why did Barth get stuck in these themes, anyway? I stopped reading him years ago, and it's taken your blog posts to remind me exactly why. The first Scheherazade-themed book I read was interesting enough, but when I hit the third one, I gave up.

I'm inescapably reminded of that wonderful Yeats poem, The Circus Animals' Desertion (http://www.web-books.com/classics/Poetry/anthology/Yeats/Circus.htm), which is about a writer being stuck in his themes. I don't think that Barth ever got the epiphany that Yeats wrote about achieving, the one that lifted him out of "the foul rag and bone shop of the heart". It's sad.

Why do you do this to yourself? :)

"It was the dream itself enchanted me"

I've only read Barth's official books, not any biographical or critical pieces that he hasn't written himself, so I'm not privy to any secrets.

But on the basis of his (very autobiographical) work, I think he's become increasingly isolated and cocky. I think he stopped absorbing external events (in any detailed way) around "Chimera," and since then has relied entirely on what his life has become: him, his wife, their sailboat, and the books he read in University.

It's interesting to note that his books "got stuck" around the time that he got his divorce and stopped using amphetamines. This certainly is not an endorsement for bad relationships or drugs.

He has made no apologies for his writing style in his "Friday Books" (saying just that he prefers "tell, don't show").

His status, I think, is based entirely on the reputation of his brilliant first novels (even "Giles, Goat-Boy" seems good to me in comparison with his later stuff), his "Lost in the Funhouse," and with selective assignment of his later books (each of which is good ALONE) in University lit courses.

I'm glad to hear that I'm not the only one who can't hack his Scheherazade'ing. I had ALREADY read many of those books in the past, but I actually liked them because I read them in alternation with his earlier novels.

Now that I see the sorry, entire "arc" (or rather "flat line") of his latter-life composition, it really has coloured my perception of the whole.

Adrian, it really has become an unpleasant chore!

But it didn't start to get unbearable until about four books ago, and by then it was too late...how could I spend half a year and go all this way, just to give up now?

Only one book left, and it's his shortest. It will feel SO GOOD to read something else.