Hmmm. There are a few things to be said about this June 30, 1928 advertisement from The New Yorker. 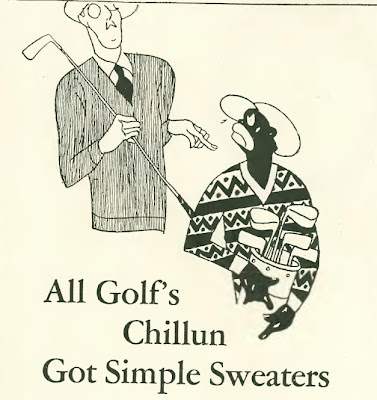 First, there was simply no escaping this black caricature in the '20s press. The cartoons always showed these big-eyed, slope-headed, huge-lipped creatures, usually scuttling in the background and carrying somebody's bags. Even when the cartoon's joke did NOT involve the servile black character (and it rarely did), he was invariably drawn in this way.

At first I was shocked, but after three years of New Yorker cartoons I'm gradually realizing that the cartoonists of the time -- whatever their own beliefs -- were largely drawing in an accepted style, the same way that all chorus girls were distinct in their comparative bustiness, all businessmen were fat, and all Jewish characters had big curly beards and glasses.

So in this illustration featuring the dignified golfer and the servile caddy, the black character has the additional indignity of wearing the offensive golf shirt. Peck & Peck tell us that the days of "bold, bad checks and Chuck Connor stripes" are gone, and that "good taste" is now the order of the day. That was 1928, mind you.

The question (other than "who was Chuck Connor?") is...why do people continue to wear ugly golf sweaters, eighty years later. Are some just taking an awful long time to transition? Much like the "ugly car salesman suit," the "ugly golf sweater" is a long-standing joke with more than a kernel of truth.

Is this because the stereotypical dedicated golfer -- like the stereotypical car salesman -- is clueless and reactionary, meaning that they're forever out of style? I wonder how this fashion trend started, what defines it, and why it continues today. Since I have never actually golfed I'm afraid the answer eludes me.
Posted by Adam Thornton at 7:14 AM

Ugly-ass sweaters thrusted upon black folk counts as oppression! This cruel legacy could be felt even as late as 'The Cosby Show'. That's why clothing lines such as FUBU (http://en.wikipedia.org/wiki/FUBU) had to emerge as organized resistence to this inequity.

I myself insist on knitting my own sweaters to buck retailers attempts to pass off garish, threadbare, cheap, pill-ridden,acrylic blended tunics for warm, functional tastful sweaters. I live in CANADA, people! This should be standard!

Oh geez, I'd forgotten about Bill Cosby's sweaters...he was so PROUD of those things! They were like a gimmick or something! And ugly.