The Barthathon: "On With the Story" 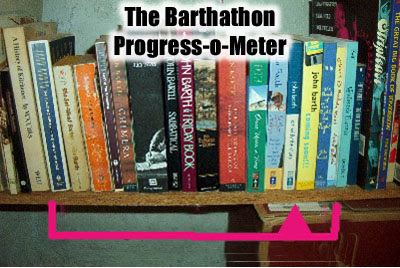 My reviews have made it sound like I don't like John Barth. Let me clarify that I really LOVE his writing -- and I think he's probably a fabulous guy -- but there are certain things about his BODY OF WORK that I find painfully annoying (repetitious characters/themes/situations, dippy pillow-talk, and Scheherazade-aphilia in particular).

The thing is, a book can be perceived in many ways, only one of which is as a part of an author's collected work. "On With the Story" (1996) can be viewed as "part of the whole" -- it expands on many of the thought experiments that Barth toyed with in "Further Fridays," in particular Zeno's paradoxes and the distinction between a person's life and a person's story. It has its fair share of overdone Barth characterizations and people do, indeed, go sailing around on sailboats. Quite a lot actually. And some of the story conceits are self-defeatingly tricksy ("And Then One Day..." and the title story in particular).

But the tales in "On With the Story" often break from tradition in refreshing ways. The general theme of the tales is that of grief and suspension -- stretching out "the good times" can be nice but may only postpone the tragedy. The people in these stories aren't just sailing around wondering if they should have children or if they should have a divorce...they are dealing with (or trying to deal with) death, loss, awfulness, and the last good days, weighty topics that Barth hasn't explored since the beautiful final chapters of "Letters."

In the middle of this is the book's high-point: "Stories of Our Lives," which moves jerkily between distinct characters who are only tangentially related, exploring their struggles and their individual grief. We become engaged in one character's story, we begin to feel their anguish...and then we move suddenly to a tangential character and learn about them instead, putting personal anguish both on a pedestal AND in a worldly perspective. This is the balancing act that Barth does so well. It's what Robert Coover only wishes he could do. It is storytelling -- and life-telling -- at its best.

Did you see what I wrote there? The story moves "between distinct characters"! For the first time in recent memory Barth has put aside his broken Ident-a-Kit method of character development and given us...new people. They're not all just him and his wife! In "Preparing for the Storm," Barth gives us a surprisingly modernist tale of three characters who bear NO RELATION to him or his wife!

And what's more, these characters live and breathe. They're full-fleshed, unique, perfectly formed. They fit their stories and their circumstances, and most of them would seem downright ODD on the deck of a sailboat. In 1996 Barth was still capable of inventing a new character...so why did he stop?

In one of his more autobiographical books (forgive me if I forget which one) he said that the reader was probably getting tired of old married couples sailing around the Chesapeake, but that that environment was so much a part of his experience that he felt anything he wrote WITHOUT those elements would be somehow false. I agree that his sailing old couples "ring true," but so do these OTHER characters -- the loners Bowman, Tyler, and the narrator battening the hatches before an oncoming storm, Mme Jacqueline Masson with her missing sunglasses, slacker William Allen Wentworth III about to suffer a mundane but crushing revelation.

That's not to say the "Barth and his wife" characters aren't significant as well, of course. "'Waves' By Amien Richard" -- with its teeth-gritting tension (narrative and otherwise) -- and "Ever After" both succeed (and remain fresh near the end of a Barthathon) because they put "Barth and his wife" into new (and terrible) situations. Those stories -- and the frame-tale as a whole -- are beautiful.

"On With the Story" is an uneven collection that is usually satisfying, and is brilliant when it counts. And Scheherazade is only mentioned twice, which at this stage in the game is like her not being there at all, thank goodness.

In my last review I claimed that Barth's language lacks poetry. I stand by that assertion to a point, in that even at his most poetic he is still appealing to structure, rarely taking a "flight of fancy" or just giving us raw emotion.

But that doesn't mean Barth's words are never beautiful...far from it. As my mea culpa for ever suggesting such a thing, here are the final words from "Stories of Our Lives," which also nicely sum up the feeling of the entire (mostly wonderful) book:

The web of the world.