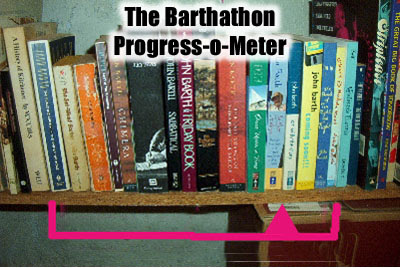 Take my advice: NEVER DO A BARTHATHON.

The frustration I'm feeling with John Barth is due not just to "Further Fridays" (1995), but also to the fact that I'm halfway through his next book...and while I could excuse Barth's repetitious obsessions in a retrospective essay collection, I cannot excuse them in a subsequent collection of new fiction.

So let's just say I was annoyed when I read "Further Fridays," but my annoyance was self-tempered ("they're essays, it's a collection of diverse material"). Now my annoyance has been ramped up and confirmed, so my feelings about "Further Fridays" -- and Barth as a whole -- are retroactively amplified.

Alright. Dippy cover aside, many of the "Further Fridays" essays are interesting, and some are outright brilliant. His musings about story structure and writer's craft are the most concise, helpful, and entertaining essays I've ever read about those subjects. Barth's students were lucky to have such an articulate and well-informed teacher.

Many of the themes in these essays are echoed -- sometimes word-for-word -- in his novel "Once Upon a Time," and this made me realize something significant about Barth's work: he is basically ALWAYS writing essays; his novels are all about rigorously explaining situations within the framework of an equally rigorously-explained narrative structure.

This may be a strength -- rarely do his novels deviate from their straight-and-true direction -- but I've suddenly noticed that he has no sense of "poetry." His words are carefully-chosen but they are meant to EXPLAIN, not to evoke an emotional response. Even his actual (dippy) poetry is as planned-out as a haiku, albeit a haiku designed to convey a straightforward idea. Barth knows his words intellectually, but not emotionally.

This is most apparent when he proudly presents us (again and again) with his very own newly-minted pet phrase: "coaxial esemplasy." He uses this phrase so often that it gets its own index entry. After defining it in various round-about ways he finally admits that it's exactly the same concept as "feedback loop," but he considers "coaxial esemplasy" to be a more ELEGANT phrase due to the more "modern" connotation of "coaxial" and the ETYMOLOGY of the word "esemplasy."

But hey, Barth: the phrase SUCKS. You're so intent on the intellectual sense of the individual words that you don't realize that, as a phrase "coaxial esemplasy" is clumsy, forgettable, and impossible to parse. The fact that he's used it in his FICTION as well ("Once Upon a Time") hammers home an essential Barth weakness: he loves to explain, but he doesn't bother putting words into beautiful sentences. Form DOES often trump storytelling in his books, because he falls in love with ugly (but nifty) phrases.

This goes way back to his earlier novels. He'll throw these crazy, awkward phrases at the reader (eg. "What you've done is what you'll do") without stopping to wonder if there isn't a better -- and more elegant -- set of words available. Then he'll use them again. And again. And this comes to the basic problem:

Barth is fallible. He can make bad stylistic choices. I think he does this because he becomes passionate (aka "obsessive") about something, and he doesn't realize that other people don't feel the same way. If you've been reading my Barthathon posts then you know where this is going:

Schehera-freaking-zade. Excuse my crudeness, but Barth has had a twenty-year hard-on for her, and I'm not just being flippant when I say so. She is CONSTANTLY coming up, and you can always tell when he's about to mention her again; his writing heats up, he beats around the bush a bit, he sort of shyly avoids the bait, and then WHAM: there she is, presented as though she were an ACTUAL WRITER (as opposed to what she really was: a minor fictional character who existed mainly so that the stories of OTHER characters could get told). Every time Barth presents her in a list of ACTUAL PEOPLE (eg. "You can see this in the stories of Cervantes, Borges, Scheherazade, Pynchon...") I want to scream, and I do, as I'm screaming now: SHE WASN'T REAL AND SHE WASN'T VERY SIGNIFICANT!

Barth is in many ways a LIMITED AUTHOR. His themes, characters, settings, and concepts revolve around the same small handful of ideas. He knows those ideas inside and out and most of them are deep, honest, and beautiful...but that doesn't change the fact that Barth is inexcusably repetitious. The Scheherazade thing is just a symptom of something more unpleasant.

This isn't a problem if you read a SELECTION of his novels, particularly from different points in his career. And sometimes he DOES reach out beyond these worn-out themes (and when he does he's usually brilliant), and he even manages to explain away his obsessions in a halfway-convince way...for a while.

But whenever I read about an older teacher slipping his increasingly-impotent penis into the cleft of his young ex-student's buttocks while sailing a boat in a storm after a fetishy discussion about Scheherazade but before sending a message in a bottle and then having a marital tiff that turns into a full-blown crisis which ends with the woman "teary-eyed"...

Did I mention that his essays about Borges and goose-art were exceptional?
Posted by Adam Thornton at 7:18 PM

You won't believe it, but watching some modern serial killer "mystery" films, reminded me of that Eric inspired discussion on carnography. That lead to a new wikipedia entry:

leading to the discovery that
1)David Morrel was born in Kitchener, Ontario, Canada
2) Did his PHD thesis on John Barth.

I'd heard someplace that David Morrel was from Kitchener, but I'd totally forgotten that. And it does turn out that Barth -- when he was living in Boston and Buffalo -- did a lot of lectures in southern Ontario. So they probably crossed paths...

Now, if Rambo had been a middle-aged man on a sailboat, the connection would be a little clearer.