The Barthathon: "Once Upon a Time" 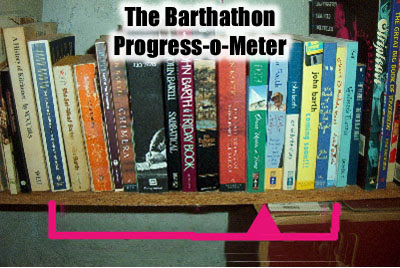 I feel increasingly stupid about reviewing these Barth books.

I'm reading them for pleasure and also out of a vague obsessive desire. I am not reading them so I can write thoughtful (let alone accurate) reviews. Who cares what I have to say about John Barth's writing? Not even *I* care.

How appropriate that these doubts would come to the surface of my brain just as I've finished "Once Upon a Time" (1994), Barth's largely autobiographical "floating opera." In it he gives us shockingly candid, personal close-ups of his own Ambrose Mensch-ish childhood, his struggles to become a jazz drummer (and arranger), his lame attempts to become a writer, his growth as a teacher, the painful dissolution of his first marriage, and his later years with soulmate, former student, and later wife Shelly (she of the "for Shelly" dedication fame).

You might say "oh no, he writes about that stuff in ALL his books!" You'd be right, but that doesn't mean that "Once Upon a Time" isn't worth reading. In this case, Barth approaches all these anecdotes with a sharper filter; not only are they more-or-less "true" this time around, but they're also told in the context of the novel's biggest theme: vocation.

Yes, it's the story of Barth's "calling," that is, his need to make sure that "the sentences get written." Everything in his autobiography is a preparation for the next step, the next idea, the next book. Obstacles are there to teach him lessons, and the rewards are lessons learned. Through "Once Upon a Time" Barth tells us How He Became a Writer, and all those life experiences we're already familiar with are retold so that they point in that precise direction.

Sound artificial? False? The benefit of hindsight? Definitely, and as usual Barth turns that structural weakness into a strength. During the story, Barth (or Shelly, or his twin sister) reminds us at appropriate times that this vocational tale is still a STORY. One of its major characters, Jay Scribner, plays a part in all of Barth's autobiographical epiphanies...but Jay never existed. He's only in the story because, in Barth's authorial opinion, he HAS to be in order for "the story" to work.

Along with the book's "time" conceit -- he has set it two years in the future, and since it takes longer to write the book than it does to live its climactic events the author gradually catches up to the story -- this balance between autobiography and idealized memory is the very thing that Barth is always doing...but this time it is done explicitly and with an appropriate purpose, or at least a purpose that appeals to me. We learn not just about his life, his environment, and the evolution of his writing, but we also learn the HISTORY of those things, both real and fantastic. We learn how HE really feels, and how HE relates to the world. We learn WHY and HOW.

It is honest, clever, and significant. It's Barth's world as it is, and also as it "should be" if it were novelised (which, here, it is). It is mind-bending in a way that ENHANCES the lessons as opposed to obscuring them.

Well, usually. The hundred page introduction contains far more filler, Shelly-love-note-ing, and structure-building than anybody should expect, and that section is also uncomfortably similar to all those other couple-goes-sailing-into-a-crisis books he's written immediately before this one. And you get awfully tired of Barth's (perhaps unconscious) need to tell us exactly what everybody is drinking, which he started doing around "Sabbatical" and REALLY overdoes here. Plus, Jay Scribner's bebob-talk is tiresome ("dippy," even).

But those are the quibbles of one who has read nothing but John Barth since July. "Once Upon a Time" enriches his earlier books (and it's surprising to learn that he was hopped up on amphetamines when he wrote most of them) and partly excuses his repeated themes. There are also brand-new meditations in here that are a joy to read; Barth's description of his early rhythmic and musical revelations are beautiful and I wish he'd spend more time on them in the future (and perhaps drop the frame-tales and mythic heroes for a bit).

I loved "Once Upon a Time" years ago when I first read it. I love it more now. I think it's one of the most significant of his novels, in an understated sort of way. But please, please, please read it SEPARATE from the rest of his books, as opposed to during a somewhat gruelling Barthathon (and before "Further Fridays" which -- you guessed it -- revisits these themes ONCE AGAIN).
Posted by Adam Thornton at 7:22 PM