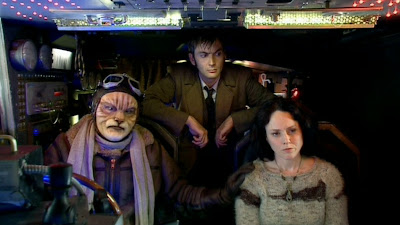 During the past three years I've been through all the usual stages -- denial, anger, depression -- but I've finally reached acceptance: the new Doctor Who will continue to contain a mixture of brilliance and skin-crawly badness. Fortunately there seems to be an emphasis on brilliance, here, but still.

Long ago I'd downloaded the first bunch of season three episodes, and I'd finished "Runaway Bride" and got halfway through "Smith and Jones" before -- for some reason -- losing interest. So the recent arrival of the third season's DVDs is full of surprises for me, both good and bad.

I did enjoy "Runaway Bride," partly because of scary-funny Sarah Parish, and partly because I like Catherine Tate*, scheduled to be the fourth season's companion...is the world ready for that? I could also excuse the rampant silliness as "Christmas Special" fodder.

Sadly, the silliness continues. David Tennant has actually RAMPED UP his goofy behaviour, though fortunately it's confined to shorter periods (at least so far). Murray Gold's music continues to annoy, especially his "tink-a tink-a tink-a" stuff for the "hysterically cheerful" scenes and his "dah-dah-dah...(pause for pop-culture joke)...BLATBLAT" riff.

To get my last complaint out of the way: the soap opera elements in the first two seasons (lonely time lord, reluctant love, "is Rose safe" family dramas) were just barely this side of "too blatant." This season's soap opera elements (lonely time lord in denial, unrequited companion love, missing Rose, and whatever Jones family tensions they're obviously leading up to) seem a tad clunky and random in the vein of:

SOMEBODY: Where are you from? Who are you?

With all that in mind, however, I've reached this resigned state by watching all the 1960s episodes in sequence. C'mon people, was there EVER a perfect episode of Doctor Who? And there sure were a lot of stinkers. So if you think that the current series is in some way perverting the pristine originals, go back and watch "The Gunfighters" or "The Ark," but wear sunglasses or you'll scratch your eyes out. The series has ALWAYS been dodgy, so give RTD and crew some slack.

And season three is really quite good so far. "Smith and Jones" managed to introduce a new companion and STILL have an interesting story with a fully realized alien species. "The Shakespeare Code" had some tiresome moments, but the cackly witches were fun. I just finished "Daleks in Manhattan" and I'm always a sucker for horrible mutation (though they could give the overblown Brooklyn accents a break).

I saved the best for last: "Gridlock," which I thought was about as good as Doctor Who can get: smart, scary, funny, weird, sad. Emphasis on SCARY. Nice to see the Macra make a return, and I thought the entire concept was unusually intelligent. I'm not looking forward to the commentary, though, since I see the insufferable Julie Gardner is there ("Awww, Murray's score is just BRILLIANT here, hooray for Murray! We are SO LUCKY to have him. We brought back the cat people because everyone LOVES Russell's cats, the cats were BRILLIANT, and you're brilliant too, Russell! We are SO LUCKY to have you on this show, Russell...bless! I am SO LUCKY to be part of this absolutely BRILLIANT team.")

So yeah, this is the perfect collection for a sickly weekend, but I wonder what RTD has planned for the conclusion...a big Macra vs. Daleks battle, with more time lords and the return of Mickey, perhaps?

* A small chunk of my blog traffic is due to Wikipedia's "hyper-gyp" article. The article links to my short blog entry about Catherine Tate's "foreign language interpreter" sketch, which has nothing to do with hyper-gyp at all. Thanks, inaccurate Wikipedia link!
Posted by Adam Thornton at 3:16 PM

Agreed on the clunky soap-operatics. For a start, the whole "her name was Rose" thing went from well-earned tribute to dead horse abuse in no time.

"Gridlock" might well be RTD's best yet - it's got that over-the-top British science fiction comedy thing going for it.

I'm no Dalek fan - really, none of us are in this house, so that two-parter went over like a bucket of something rotten. "42" - exciting but flawed. Things really took off, though, with the three episodes after that.

And then the final three... well, I won't say anything just now. I'm curious to hear what you make of them!

Where do you think the inconsistency comes from?

Is it different writers and directors per episode?

Or is it the same team that sometimes hits and sometimes misses?

I didn't mind the first half of the Dalek two-parter, but the second half was absolutely the worst episode I've EVER seen. I can't express my disgust at this episode in a single comment; it deserves a post in itself. :)

I really liked "42," partly because I didn't know what to expect -- I haven't read reviews and I don't watch the "coming up next" teasers. It was sheer non-stop energy, well divided by the "Martha has been ejected" moment in the middle.

"Lazarus" I lump into the "dumb killer monster" category, which is good on its own level.

"Human Nature," however, is REALLY good. It was my "one last episode before bed" choice, and I was FURIOUS when I found out it was "to be continued." Amazing!

Is it just me or is this season already infinitely better than the previous one? Only "Tooth and Claw" and "The Girl in the Fireplace" really grabbed me from season two, and even they had some embarassingly awful moments.

I like "sober Martha" more than the "flippant Rose" of season two, that's for sure. Now that they're finally developing her character with "Human Nature," they'll write her out in five episodes...

The "Doctor Who" creative team has always been a real hodge-podge of producers, writers, directors, designers, and script editors. Each one of those people has a bunch of uncompromising (and often conflicting) ideas, and when you throw in a limited budget, a frantic schedule, nervous executives, a fickle casual audience, and a diverse fan-base...well, it's a wonder it works at all.

Episodes can be bad because they're based on an imposed idea that the writer doesn't like (probably most common in the John Nathan-Turner era); because the script was altered at the last minute by the script editor; because the money wasn't there; because everybody was too ambitious; because they got into a rut because they relied on audience numbers as opposed to trying new things (Troughton's era, or most of the "spectaculars" in the new series).

Or -- also typical of the new series, and of "Torchwood" as well -- nobody seems to be on the same page concerning who they're trying to appeal to: children? Rabid adult fans (in which case, fans of which era)? New viewers? American market?

And sometimes the current creative overlord (Russell T. Davies) indulges some insane personal whim, seemingly because he likes to yank the chains of fandom, which would be funny if he weren't responsible for a TV series with such potential.

Oh yeah, I'd forgotten about "Lazarus". Not amazing, but certainly not bad either, and Mark Gatiss gets to be the first person(?) to both write and guest star in the show. (He did a pretty fun turn as the Master in a "what if" audio that also starred David Tennant as a foul-mouthed, high-strung UNIT colonel.)

I really do have to post my own review sometime.

Harry Lloyd is definitely the strongest point in the "Human Nature / Family of Blood" episodes, though EVERYBODY excels. I loved when you see the family for the first time, and all four of them tilt their heads simultaneously, like dogs. Amazing touch.

It suffered a bit from what I realize is a chronic New Series shortcoming: the inability to quit while they're ahead. Instead of ending on a natural or subtle note, they need to push to a second conclusion, and then usually to a third as well. If they'd just end when it "feels right," they'd have stronger episodes overall.

"Blink" was like that as well: GREAT until the finaly "scary" montage. Plus, any eight-year-old could see the logical flaws: since two people can't possibly watch all four angels, this should be incredibly easy. They could nab you when you sleep. They could just sneak up behind you and you'd NEVER see them.

Plus...sure, all four angels might be looking at each other in the end...but what happens when the lightbulb goes out?

Anyway, it was otherwise superb and plenty scary. Even if the last three episodes are flops I'll still feel gratified with the series as a whole.