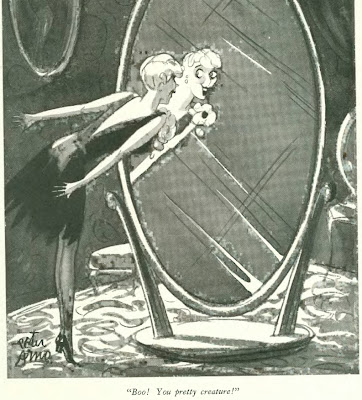 I find Peter Arno's "New Yorker" cartoons to be hit-or-miss, though early on I was enthralled by his "Whoop Sisters" strips. These cartoons were always single panel, somewhat confusing, and strangely vertical.

They'd show the two muff-wearing Whoop Sisters -- uncouth, middle-age British women -- striding rapidly through some far-out scene -- the greet-line for the Queen, exploring a construction site, etc. -- and exposing their crassness by making ridiculous comments about the situation (or sometimes just gossiping about something irrelevant). The sisters were always on the verge of a strange hysteria, and would express their amusement by saying "Whoop!" (a loud way of laughing, in this context).

As you can imagine this got boring eventually. After releasing a book of "Whoop Sisters" cartoons, Arno went back (as of 1928) to the strange illustrations of society gentlemen and debutantes that he was so good at. See above for the oddest one yet from the June 9, 1928 issue.

I mentioned Arno in a previous blog post about writer Lois Long (AKA "Lipstick"), because the two of them were married in what remained a sort of secret union for many years. This morning, however, I discover that those tales of Long and Arno's drunken sprees weren't all fun and games: he repeatedly had violent run-ins with his peers, and Long finally divorced him in 1931 for extreme cruelty.

Sometimes you'd rather NOT know certain things about artists.

PS: The OS X dictionary does not recognize "debutante" and wants me to use "debut ante" instead.
Posted by Adam Thornton at 7:36 AM

It's a bit of a tangent, but my favorite ancient comic is The Outbursts of Everett True. His basic formula, Everett observing an inconsiderate person then delivering a savage beating to them before delighted onlookers, is an unsettling one.

If you haven't seen the Barnacle Press, it's a wonderful sourse of old comic serials and cartoons.

Wow, Everett True is GREAT! There's nothing like a simple conceit to keep it fresh, and it's nice to see that things haven't changed much in 100 years...

Barnacle Press, a new way to keep myself sane. Thanks, Syd!