The Barthathon: "The Last Voyage of Somebody the Sailor" 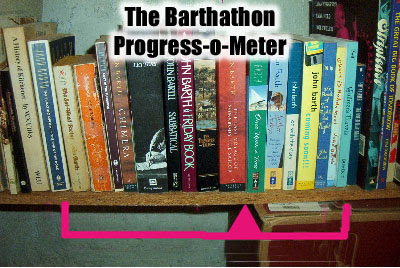 Ignoring the funhouse of creative-license time-twisting for a moment, "The Last Voyage of Somebody the Sailor" (1991) is about Simon. He travels several life-voyages (childhood to adulthood, family life, divorce, fatherhood, love, sex) while absently flirting with the barrier between literature and the real world. During a climactic moment he is transported into the past (or the fiction) of Sinbad's seven voyages, where he hopes to find his way home by exchanging journey stories with the famous sailor himself.

That simple synopsis does not make a Barth novel, however. Introduce an elaborate mystery involving pirates, virgins, madness, metaphor, and the plotting between nine or ten members of the Sinbad household. Likewise structure the book as a series of frame-tales, re-tellings, interludes, and unreliable narrators. Wrap it all up in the final hundred pages with dense exposition that is both fascinating and maddening. Throw in lots of sex and agonized interpersonal relationships, and you have the REAL "Last Voyage of Somebody the Sailor," which is full of so many hair-pin turns that you'd better pay attention or you'll lose your way.

I "lost it" the first time I read the book, which was only a few years ago. I paid scant attention to parts of the story that seemed tangential and dull near the beginning -- the details of Sinbad's visits, the backstories for Kuzia and Jayda (Sinbad's current and previous householders), all that stuff about names and impersonations and all the different versions of the stories. So when the story ended (and those skimmed details became crucial to the mystery) I had no idea what had happened, and I didn't pay attention to the final, beautiful chapter: the storyteller unraveling, the uncertainty before the end, the sad, the sad love.

I understand it all better this time, but I also better recognize the jarring shifts that the book goes through. The mundanity of Simon's (and our) world is described in a distinctly modernist, style...a style which those in Sinbad's world find unrealistic and boring. They want "realistic" stories about dashing heroes and giant serpents, as in Sinbad's tales. The novel bounces back and forth between modernism and romanticism in the same way that Simon spans the worlds.

And yet these two words are not so far apart. Simon loves both of them, and Barth writes in both styles. Love exists in both worlds, as does hate and cruelty and vengeance. "The Last Voyage of Somebody the Sailor" is about many things -- it's a mystery, an adventure, a serial love story, a bribe for Death -- but the theme that struck me most was that the "real world" can sound fantastic to romantics, and the "romantic world" can sound boring to modernists. The style is important, but the stories contain the same elements under the skin. Sinbad's seven-several morals apply just as well to us as well as they do to them.

To try to sum up the book this way is a stupid thing, and I apologize. If you plan on reading it yourself -- and I'd put it in a Barth "top five" if forced to make a snap judgement -- give the original Sinbad story a gloss first. You don't NEED to pre-read it -- and the book adapts the voyages nicely in all the appropriate places -- but if you already know the Sinbad story you'll be able to devote attention to what really matters: who said who did what for which potential reason, when.

That sounds sterile, but the book isn't. At least, not entirely. I love Barth's "Ambrose Mensch"-style meditations on childhood, maturation, and resignation most especially, and this novel has all of that in spades.