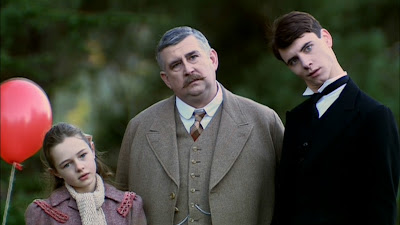 Give me strength to write short reviews of episodes 5 to 13, which I watched for the first time during the past two nights.

Evolution of the Daleks

This has to be the worst episode of Doctor Who ever, including anything involving Colin Baker. I can only assume that everybody involved KNEW it was awful, but they'd already committed so much time and money -- and it was the only Dalek two-parter they had on hand -- so they had no choice but to follow through. They shouldn't have. They should have just gone into reruns.

Besides the cobwebby, desperate plotline, it's the dialog and the acting that kills this one. By requiring American accents they ran afoul of what I think of as "Xena Syndrome"...they needed to hire either Americans living abroad -- in which case the talent pool is very small -- or they needed to hire local actors who could put on a credible accent, in which case the actors were too busy maintaining the dialect to actually, you know, act.

It was so bad that if I could physically remove this episode from my DVD, I would. So bad you expect a Slitheen to be in it. So bad that it's worse than "Fear Her."

Sometimes you need a good old-fashioned "run from the monster" story. It helps if the monster is as freaky and goopy as this one. The inevitable Jones-family conflict slows things down a bit, and for the life of me I barely remember the details...but at least I remember it was fun.

Non-stop action! This was a real surprise, and I'm amazed they managed to pull it off: forty-two minutes of frantic running, fighting, screaming. I think it worked awfully well and I even liked the characters.

It's been so long since the Doctor got possessed by something.

Human Nature / The Family of Blood

Complex, multi-layered, character-driven. Ingenious idea. Martha's turn to shine, and wow does she shine. The nasty folks (see above picture) were all excellent actors, and scary. Next to the first season's "The Empty Child" I think these were the most frightening of the new series, and it really comes down to the convincing performances (how hard must it be to be so AWFUL?)

Extra points for the fairy-tale quality of the conclusion, wherein we see an uncompromising and quite disturbing Doctor mete out impossible (but somehow appropriate) punishments. Again, wow.

Sadly, as so often happens, the production team doesn't know when to quit. They often try to extend the episodes just a BIT longer, to squeeze out a few more drops of meaning or character development. Noble yes, but almost always anti-climactic.

I really do like these once-a-season "outside the box" episodes, and this is another one with excellent cast and a great concept. It progresses in a suitably eerie, step-by-step fashion, interspersed with surprisingly sweet moments. Like, yes, the creatures do something awful to people, but their victims end up pretty happy with their fates.

The problem is, after such a carefully-woven plot, the last ten minutes are so full of impossible holes that the scary stuff -- which is awfully scary -- is eclipsed by the shoddy bits. And the "spooky-boo" ending was just stupid, though kids probably liked it.

Utopia / Sound of Drums / Last of the Time Lords

I've been praying for a three-parter since the new series began, and I think it worked pretty well. Apparently, in Russell T. Davies' universe, all time lords are manic goofballs, but in The Master's case...well, it sort of worked, because he was so endlessly CRUEL. I mean really, his scheme was TERRIBLY cruel, and irredeemably so. Yet I still understand the Doctor's anguish at the end. It worked.

And Martha's exit was probably the best of all the companion exits. I also liked the Face of Boe zinger, though maybe I'm the only one.

On the downside, however, somebody needs to put a leash on Davies, and perhaps electrify it. Did nobody think to sit him down and say "Russell, tell us again why you want to turn Doctor Who into Gollum?" At the same time they could have asked him about the wisdom of a Toclafane theme song, shortly before firing whoever was in charge of the "get-older spasm" effect, which could only have been the result of a time/money crunch.

I'm happy with the season. It suffers the usual excesses but also contains more than the usual number of good (even great) episodes. I liked the relative soberness of Martha Jones as a companion; I enjoyed having Captain Jack back doing what he does best (action-joke-flirting); and I've finally warmed up to Tennant's Doctor (or maybe he's finally warmed up to me?)

What would I like to see next season? Longer stories, a darker tone, and a momentary reprieve from soap opera moralizing, please.
Posted by Adam Thornton at 8:35 PM

Email ThisBlogThis!Share to TwitterShare to FacebookShare to Pinterest
Labels: Doctor Who, review, television

Just wondering, what were the plot holes in 'Blink'? I don't recall them, I enjoyed this one best of this season's offerings. The ending was a wee bit hokey, but then again, it IS Dr. Who.

I can excuse lots of things due to the "wibbly-wobbly time" thing, but it was all about the angels. Why didn't they just attack? They could have grabbed Sally Sparrow at any time during the episode; even two people cannot constantly watch four objects. That alone makes the behaviour of the angels in the climax pretty much nonsense.

What was the deal with the whole "you wait upstairs while I try to find a way out" thing?

With all the angels staring at each other in the end...sure, but Sally and indie-boy were in the middle of that circle, blocking eyelines.

And what happens when the basement light turns off?

(I may have missed part of the explanation; if the angels would be frozen FOREVER simply because they saw each other ONCE, then some of these objections do not apply)

Plus, who threw the rock at Sally right at the beginning? Why?

I guess the Doctor threw the rock. I guess he pulled a Bill and Ted, going back after the adventure was over, trying to make sure that she read the message.

As for the angels, yeah, that stuff did kinda bug me, now that you mention it, but still, I try not to let apparent paradoxes (paradii?)rattle my cage too much.

Family of Blood was cluttered at the end, wasn't it? I wonder if it has anything to do with being adapted from a (7th Doctor) novel. The narration, coming out of nowhere right near the end, was especially jarring.

Blink did so many things right that I was willing to forgive its failings. Yeah, the time travel and no-blinking conceits were stretched pretty thin (why didn't they take turns blinking, I wondered?) but it delivered lots of fun and lots of scary for what may have been the smallest budget of any episode of the new series.

And the closing three-parter: Utopia was a weird mix of the old mad and/or bumbling scientist stories like City Of Death, McCoy era punk baddies, with a good dose of RTD's over-the-topness. And hey, Gallifrey!

It got pretty dodgy toward the end, though - the Doctor rejuvenated by a wave of hope and faith was just a little too Disney for me. I'm afraid I pretty much winced my way through Last of the Time Lords. Doubtless the Master's musical entrance caused aneurysms all over fandom, but I thought it was possibly the best thing about the episode. :D

Yeah, maybe the rock-throwing was an initiation rite...if Sally wasn't willing to follow instructions, she'd get a concussion and be unsuitable for the trials ahead.

In the "Doctor Who Confidential" cut-downs -- which generally contain one minute of insight and then twelve minutes of a money-shot montage laid over an unsubtle pop song -- Davies explains the "Doctor as Gollum" thing as needing to bring the Doctor so far down that his resurrection is even MORE spectacular.

But yes, Disney faith-and-hope...I could swallow it JUST BARELY. They'd already wedged in the power of words with "The Shakespeare Code," and the Doctor said he'd spent the last year plugging himself into the time vortex...so, okay.

That doesn't explain why his resurrection looked so awful. Or why the "Doctor Who Confidential" did an actual EXPOSE on how the "get-older spasm" was made. They should be trying to make us FORGET about that effect, not lovingly re-showing it, over and over, with Tennant saying how embarassing it was to do.

I agree, my quibbles about Blink are only quibbles; I loved the story. But with a few more minutes spent on the script they could have resolved the nonsensical stuff.

By the way, the DVD has an hour-long feature about "Music and Monsters."

What a British concept, to put on a huge live show where the Doctor Who monsters perform on-stage with a full orchestra and choir, re-living moments from the new series, all for charity.

It should have been terrible...but no! First off, I'm forced to admit that Murray Gold's music CAN be very good; his themes for "Girl in the Fireplace" and for Rose's departure really are amazing.

Second, it's easy for me to forget that I am not the ONLY demographic this show is aimed at. When you see the kids in the audience literally FREAKING over the events on stage, you realize that they are targets of the show as well...and you also get a feeling of "hey, that was ME thirty years ago..."

And finally (and this is related to the 15-minute studio tour elsewhere on the DVD), Freema Agyeman should ease back on the cocaine, but only slightly.

I've heard a lot of people complain about Murray Gold's music, but to be fair, the director usually decides a lot about the score: where to put music, the overall mood, and so on. And the unfortunate decision to make the show "big and loud" - including cranking the background music until it obscures the dialogue - came right from the top.

By contrast, the silent moment in "42" was great... though it lost something when the Doctor had to keep yelling "I'll save you!" instead of getting on with it.

(That kind of restraint is one of the things I really liked about that "other" science fiction revamp, Battlestar Galactica. But I didn't get far with that show - just couldn't handle its grim, unending, survivalist gloom.)

Yes, Battlestar lost me when it just didn't seem to be GOING anywhere. And most of the lead performers began to get on my nerves.

I'm going through the commentary for the box set, and Davies is saying that the next season will probably be a lot lighter...he thought season three was as dark as it could be. NO! NO NO NO!

But then, "Catherine Tate" and "dark" do not fit well together, I think.

And you know, I really liked the "I'LL SAVE YOU!" thing. It kind of broke my heart...