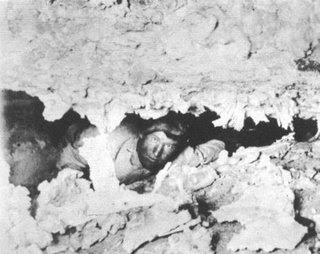 No matter my reluctance to actually squeeze through the dark, buggy confines of a real-life cave, I love to read about OTHER people going into them, which is why Roger Brucker's book "The Longest Cave" is such a treat.

It's the story of the Mammoth/Flint cave system, and in particular the attempts of the authors (and many others) to survey and connect them. I've always thought that the grueling nature of caving was just about "squeezing through that tight spot" or "ducking under that stalactite," but Roger Brucker brings the truth home. Have you ever spent five hours crawling on your belly through a dusty passage only slightly bigger than your horizontal body, trying to find the end of a mysterious, extended tunnel, occasionally sleeping, rarely given the opportunity to turn around?

No? Well you're not alone, because apparently nobody's ever gotten to the end of that passage (called "Left of the Trap"). And therein lies some of the beauty of "The Longest Cave." It describes in a matter-of-fact way the places that humans JUST CANNOT GO, because even the most acclimatized of us simply do not have enough stamina. And that's incredible.

Although Brucker's style tends to be of the "We walked through the passage, Clive kept on singing, we told him to be quiet" variety, he really does maintain the tension until the very end: the connection of the Flint and Mammoth systems to create the world's longest cave. He's not a great author but his passion and his first-hand experience more than make up for his stylistic stumblings.

As an aside I've discovered that it's almost impossible to actually see a MAP of these caves; the maps in Brucker's book are not very detailed, and there don't appear to be online sources for ANY Flint/Mammoth cave maps. I wonder why? I bet they're kept pseudo-secret to prevent people from wandering into them and getting lost.
Posted by Adam Thornton at 8:20 AM

I just wanted to tell ya, Muffy, that I loooove your blog!

Kim and I agree that you're a knock-out, too. It's cool for me to read your writing again--I always loved your wit and satirical look at things during our good ol' high school years.

You look like you're living life fully and that's truly an inspiration to me. Cheesy, I know, but truer than you know.

I kinda know what you mean, Muffy, about totally loving to read about things I'd never do. I had a great time reading an old book called 'Congo Kitabu' by Jean-Pierre Maillet, about his adventures as a 6'6" Belgian man living among the pygmies in deepest darkest Africa. Not only will I likely never see Africa, the kind of isolated tribes and terrains he went into simply don't exist anymore. But reading books by folks with passion for what they do is inspirational indeed.

Oh yeah, and in case I forget, have a Happy New Year, kiddo.

It's great to hear from you, Tanya! I'm glad that you're enjoying this blog's esoteria and getting something out of its "frolickness." Things really are very good for me...and hopefully for you as well!

You'll never guess who I stood in line behind at the Pharmacy yesterday: Mr. Coling. A truly strange experience.

Hugs in return, and a happy New Year too!

Happy New Year to you too, Scott!

Yes, it's strange, some of these books are telling us about things that could never happen again. I have T. E. Lawrence's "Seven Pillars of Wisdom" waiting on my shelf, for instance, and I'd love to read a thing or two about Marco Polo...

These sorts of books make me feel both adventurous AND smart, which is good. :)