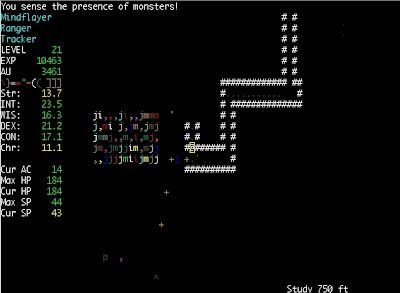 Every few years I dust off the old Roguelike and spend some time obsessively playing it. For the last eight years my personal favourite has been ZAngband, and I've spent a week joyfully hacking away at it.

What's so nice about a Roguelike? You can play it on any platform. The vibrant development base makes for frequent updates and tweaks. With no attention paid to spiffy graphics -- as you can see above -- all the code can go toward providing balance, interest, and surprise. At the best of times it's like playing randomized chess. At its worst it's an endless tapping out of the same command codes ("m4b*t, m4b*t, m4b*t...").

The BEST thing about playing a Roguelike, though, is that it provides a good opportunity to just sit and listen to a CD at the same time. Each time I sit down to play the game, I put in a CD I haven't properly listened to and then play along with the CD. When the CD's over I force myself to quit the game, because nothing kills your character like general game fatigue.

Another nice thing about it is the "code of game ethics" which states that when your character dies...that's it. Game over. You don't do anything tricky -- like back up your save file -- to resurrect it. This leads to a lot of reflection during the game and a reduction of potentially suicidal choices. It also leads to intense frustration when eight hours of your life go down the toiled due to "Yet Another Stupid Death."

What's so nice about ZAngband? It's the only Roguelike with a huge randomized wilderness full of towns, ruins, and themed dungeons. Its magic system is unparalleled. It also has a good sense of humour, having strayed from the traditional Tolkein influences to bring us Robin Hood and -- jeez -- Barney the chaos-spewing dinosaur.

ZAngband has so many character options -- race, class, magic types -- that it can be a bit daunting to the beginner. So I have only one (nerdy) thing to say: Mindflayer ranger with Death magic. You'll spend the first hour or so running away from everything, but once you hit your stride...
Posted by Adam Thornton at 12:24 PM

All I can say is Thank You. My husband reads your blog and told me about Zangband because he knows how much I enjoy Nethack. Wow this is so much better.

I hope you enjoy it, Shelley! I can probably be maddening at first -- so many quirks to figure out, and so many of them only partly implemented -- but if you have any questions just let me know.

My first recommendation is not to go outside until you're at least level 13, and even then only when you have some teleportation scrolls. And run away as soon as something really nasty appears.

I did try Nethack but I missed the massive randomness.

Well Johnny always says that you have great taste, so now I know why.

So far I have only managed to get myself up to level 9 and down to level 7 but I love the constantly changing dungeon. There is quite a bit that gets confusing, but it's great. And yes I may just hit you up with a question or two from time to time.

It is amazing how entertaining little games like these can be.

There's definitely something to be said for the old-school games!

For sure, let me know if there's anything you're wondering.