I've posted in the past about the 1920s "ankle" obsession, and in particular the occasional advertisements by hosiery manufacturers (among others) about statues having unfashionably "thick ankles."

Despite the number of comments informing me that some people continue to hold thin ankles in high esteem, I've remained baffled as to why STATUES should have thin ankles, and why several different people were picking on them.

I don't have a good explanation, but at least I'm not crazy...cartoonist Henry Holmes Smith thought it was weird as well! Here's his cartoon from November 10, 1928: 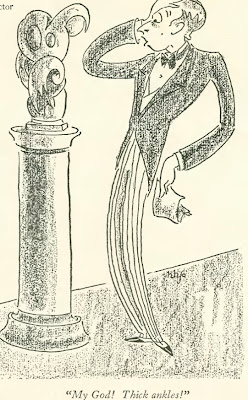 I feel SO vindicated!
Posted by Adam Thornton at 7:48 AM

I first heard that word only last month, and I love it. Though I've never known any women with cankles (a few men, though).