"The Gods of Times Square" 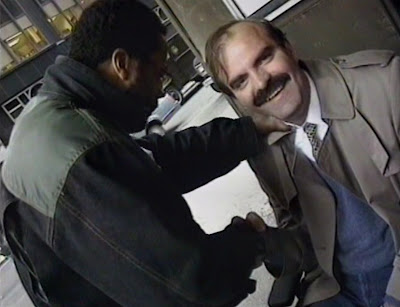 I've just watched an amazing documentary called "The Gods of Times Square." For five years prior to 1994, a guy named Richard Sandler just walked around Times Square with his video camera, filming the preachers and the homeless people who virtually lived there before Disney swept them all away.

Besides just filming the routines and interactions in the area, Sandler does his best to draw these people out. What makes this documentary unique is that he doesn't ask them about their lives or their hardships. He doesn't approach these people from a political, social, or racial perspective. Instead, he just tries to get them to describe their religious beliefs, and he gets some amazing stuff on camera.

Some of the people are very uncomfortable about being questioned, either because they don't like to address complex issues or because they want to keep their message impersonal. Some of them also assume that he's going to make fun of them. But others simply spill out their thoughts in endless chunks, as though they'd been waiting all their lives for somebody to provoke them.

I don't know what kind of selection bias Sandler had when he picked his subjects, but most of the people are slightly insane. They're articulate and interesting, but you can very easily see the point where their logical, articulate thoughts slip away into paranoia and magic.

Other people -- particularly the Jews in the "Mitzvah Tank," the "white man is the devil" activists, and many of the calmer Christians -- appear to be more "fiery" and "driven" as opposed to insane, though there's no doubt a fine line between the two.

Things get VERY interesting when the fiery characters interact with the crazy ones. In the picture above, a street preacher is trying to get a "Jesus pledge" out of a man who says he's a "substitute teacher" who "raps with the kids" in the Bronx. The preacher is doing a straight-forward attempt at conversion, but the "teacher" keeps sticking his tongue out in a disgusting way and shouting "No, I can't say that...I love the carnal sins, I love Satan's kinky ways!"

Sandler doesn't seem to make any judgements about any of the people he interviews, though it's obvious there are some he likes more than others. He's particularly interested in James -- a recurring character who appears deliberately difficult and contrary when questioned -- and Jimmy, a shy, attractive guy who believes that Jesus lives inside him and will work through him to marry Madonna and release a hit album.

But somehow it's not a freak show. I found myself empathising with the tortured thinking of the crazy people and -- to some extent -- respecting the sheer drive and honesty of the straight-forward preachers. Part of this is because the documentary is completely without music or narration and somewhat crudely edited, with a very flat trajectory and no apparent purpose. It gets a little tiresome at almost two hours, but somehow it works. It feels more raw than most documentaries.

The most significant moment comes at the very end. Sandler is filming Jimmy, who is being gently harassed for money by a babbling homeless guy named Rog. Jimmy, for all his crazy convictions, seems almost sane and noble as he does his best to dissuade Rog while still being nice to him. Afterwards he turns to Sandler and says "Could we please put the camera away and just have some coffee and talk, like normal people?" And with this one statement he elevates himself over Sandler as well; he knows better than the filmmaker how awkward and artificial the documentary-filming process is. Somehow, for one second, he's more normal than anyone. If for nothing else, the entire film is worth it for that moment alone, and Sandler sensibly fades to black on that note.

Here's a clip that seems to have been cut out of the documentary (I haven't watched the "bonus" disc yet, so maybe it's included on there). This captures the overall style of the editing, but it's much more confrontational than anything in the actual film...Sandler and this woman (Brenda Milliner) are actually taunting. Either she somehow managed to push his buttons in a way that nobody else did, or he edited this sort of thing out of the film itself.

Posted by Adam Thornton at 6:56 PM

This documentary looks like a good reminiscence of the “old” Times Square. The religious side of the Deuce. Redeemers plying the doorway to Hell’s Kitchen.

I remember some of the street preachers, including those who screamed at passers-by through a PA system. In those heady, hardcore days, maybe some of those pedestrians really did need saving!

I really had little to do with the preachers, although they definitely added character to the area and were impossible to ignore

Times Square is no longer the tenderloin district. It may have backslid somewhat, but it does not resemble the street scene that you see on ABC’s “Life On Mars,” which looks back to 1973.

Pete Hamill has a good section on Times Square’s past and present in his book “Downtown: My Manhattan.” He wrote that it had deteriorated so far in the 1970’s that it was considered by many to be not savable: “I remember asking one policeman on the Deuce what he would do about the terrible street. ‘Brick it up,’ he said.”

Granted that Time Square has been sanitized – but it’s now easy to walk the stretch between Seventh and Eighth Avenues without being accosted by anything worse than teenage girls (and their moms) waiting outside Madame Toussaud’s to see the Jonas Brothers. The wax museum’s neighbors are legitimate live and movie theatres; across the street is B. B. King’s music venue, and a Hello Kitty boutique. Very little trace of its old grittiness.

Even Bryant Park is habitable. I saw David Sanborn perform there several years ago. On another warm evening, families were spread out there, on picnic blankets, in this former drug den behind the main branch of the New York Public Library. As much as I have some “fondness” for the old squalor and danger (think Al Stewart’s “Soho Needless To Say” but with more squalor and danger), it’s nice to walk around Times Square without getting your nerves frayed.

Newcomers (and younger people) won’t believe just how wild it used to be! So a recent article in the New York Times, covering both “Life On Mars” and the city as it was in the 1970’s, has some interesting points. Some quotes that I highlighted from Dave Itzkoff’s article, with an added comment from me:

“Yet as time goes by, even the most hardened New Yorkers sometimes find themselves looking back at this period through a wistful, sepia-toned haze.” --Well, maybe… sometimes.

“But Mr. Nemec [one of the show’s producers] also has proud memories of working as a video store clerk in Times Square before the neighborhood became a rejuvenated tourist mecca, and as a waiter in a nearby Tony Roma’s restaurant, where his most frequent customers were prostitutes and pimps. “They weren’t good tippers,” Mr. Nemec said, ‘but that’s who came in for lunch.’” --Did he get any come-ons from the whores on Seventh Avenue (a la “The Boxer”)?

“Not that New York was utterly beyond redemption in these bygone years: As a kind of modern-day frontier town, Mr. Mahler said, it was teeming with peril, but also with frantic energy and with havens where experimental subcultures could flourish.” --And that it did!

“As he contemplated Times Square, that perpetual barometer of the city’s health and harmony where he was once assigned, Mr. Nuciforo [a retired N.Y.P.D. detective and 23-year veteran of the force who now is a technical consultant for “Life on Mars.”] said: ‘You get a young cop out of the academy, and he’s assigned a foot post on 42nd Street, he’s not learning the things that a cop in 1982 who was assigned there learned. You could make 10 collars walking down that block back then, and I’m not exaggerating.’” --I know – I saw it!

Sorry. This was not a rant…just a weird form of New York City nostalgia evoked by the blog post.

The NY Times article is available at: http://www.nytimes.com/2009/01/25/nyregion/thecity/25mars.html