Something Gross on the Floor

Yesterday, Zsa Zsa peed on the basement floor, which she sometimes does for reasons known only to her. Fortunately the basement is totally unfinished so it isn't difficult to clean up...just cracked concrete floors and a lot of dust.

I went into the back part of the basement where the laundry tub is, and I picked up the mop bucket I keep next to the tub and filled it with water and bleach. After scrubbing down the floor, I returned to the tub and started emptying the bucket. While I was doing this I became aware that my toes were resting on something soft; I could feel it through my socks.

Thinking I was just standing on a leaf or something, I lifted up my foot and looked down...and saw that the soft thing was actually A MOUND OF SOWBUGS. Literally, a mound, about three inches in diameter and bulging up about three quarters of an inch. Sowbugs were crawling all over it, and some of the more perturbed ones were slowly gliding off in the disgusting way that sowbugs do.

Scatter! They locomoted in all directions, radiating out from the mound, scrambling over each other like rioting football hooligans. Some were merely specks on the floor, and others were half an inch long. Caring not for young and old, I followed them with the bleach bottle, splashing here and there.

I don't know if it actually killed them. In retrospect I should have taken one of the paint cans down there and just rolled it over them, but the sound would have been unbearable. There are lots of spiders down in the basement, but it's obvious they aren't doing their job. 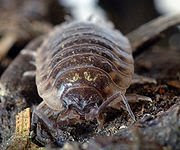 PS: I was shocked to learn that sowbugs are not actually insects...they're "terrestrial crustaceans" and they breathe through gills, which is pretty amazing. That's why they always hang around water. It's also why they're so awful.
Posted by Adam Thornton at 9:34 PM

Email ThisBlogThis!Share to TwitterShare to FacebookShare to Pinterest
Labels: gross, My New Digs

I was only able to read about a half of this entry before squealing in fear and scrolling past the rest. YUKKY!!!!! At least you weren't in bare feet. -shudder-

went there to read his take on pulp fiction. :)

I sometimes have nightmares about this exact sort of thing.

So nightmares really CAN come true!