I like the new Doctor Who series. Sometimes I even love it. At other times, however, I hate it. And the things I both love AND hate usually come down to the show's writer, producer, and script editor, Russell T. Davies.

He's written some of the worst episodes of the show, and many of his more bombastic ideas have come under criticism, but there's no doubt that the actual TONE of the show -- that is, the underlying approach and feel of every single thing that happens -- is pretty darn brilliant...and Davies controls that portion of the program with an iron fist. And when he actually pulls off one of his more audacious stunts, you can only sit in awe.

If I simply loved or hated him I'd have had no reason to buy "The Writer's Tale", but I was SO CURIOUS to know what goes on in his head...so after considerable delay and hardship (not to mention cost), I managed to track it down.

It's a collection of emails exchanged between Davies and journalist Benjamin Cook, all written during the development of Doctor Who's fourth season. Much of the book is Davies agonizing about scriptwriting. Responsible for the program's highest-profile episodes, Davies is under immense pressure to come through with scripts that are on budget and on time, but he simply can't bring himself to write until the deadline has almost passed. In the meantime he's responsible for editing -- and often completely rewriting -- the scripts for other episodes, and also overseeing the show in general.

"The Writer's Tale" is an enlightening book in many different ways. Fans wondering why certain decisions were made can get an uncomfortably close look at Davies' scriptwriting process, from the first collection of ideas -- usually gags or momentous climaxes -- to the filming and editing. You begin to understand how those wonderful and stupid moments made it into the show.

But more importantly, the book is simply about HOW RUSSELL T. DAVIES WRITES, regardless of the fact that he's writing "Doctor Who." Benjamin Cook is constantly asking probing questions -- "How do you make the audience care about a character?" and "How do you write dialog that sounds natural?" -- and instead of replying with pithy (but vague and useless) writer's workshop responses, Davies REALLY, REALLY EXPLAINS IT. He positively AGONIZES over the answers. I've come away learning more about the actual process of writing than I ever got from those "Creative Writing" courses I took in university.

It helps that Davies writes excellent emails. They're essays in themselves, and usually very funny...in fact, they come out sounding like the characters in "Doctor Who" itself. He's also an accomplished illustrator, so the book is full of the sketches he drew of various scenes while he was writing the scripts.

Throughout the book, Davies constantly refers to the way he wrote his other shows, the ones before "Doctor Who." Curious, I went to the local video store to see if they had anything...and I was fortunate to stumble across "Bob and Rose." 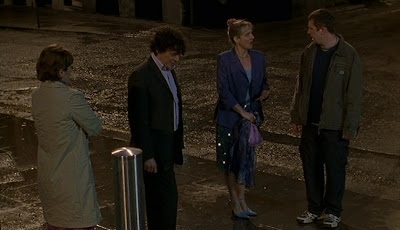 Holy cow, this show is amazing.

Besides the great actors and straight-forward direction, you've got a truly original storyline: a woman (Rose) who is dissatisfied with her long-term boyfriend ends up befriending a gay man (Bob) who is equally dissatisfied with his mating prospects. Spontaneously, and almost accidentally, the two of them have sex...

...and all hell breaks loose. Bob has a quietly insane female friend who sabotages all of his promising relationships, for fear that he'll care about somebody other than her. Rose breaks up with her boyfriend and decides not to move away from home, where her mother has just invited a decidedly shady man to live. Most importantly, Bob is gay...but he sees something in Rose that is more attractive and offers more kinship than anybody else he's ever met. How can Rose deal with his ambivalence? How can their friends deal with the fact that they're going out? Will Bob's rabidly gay-activist mother accept that her son, for whom she's thrown herself into the cause of worldwide equality for all homosexuals, is...gasp...dating a woman?

The show is ingenious. Davies simply knows how people behave, and the actors portray these behaviours to perfection. He has a knack for perfect-pitch dialogue and zinger pronouncements that suddenly sneak up on you and make you (literally) shout "HOLY SH*T!" It has the perfect balance of comedy and drama, sociology and artifice...it is in my eyes, as of the third episode at least, The Best TV Show I've Ever Seen. Ever.

So if you know something about Davies' personality then you understand the problem with "Doctor Who." He loves the science fiction, but he also loves people and reality and the everyday stuff that all of us do. In "Doctor Who" he feels a need to cram all that stuff into 45-minute episodes that somehow gel...sometimes they do, and sometimes you end up with aliens that fart.

It doesn't help, too, that Davies seems to be surrounded by "yes men" who are too in awe (or afraid) to tell him when something DOESN'T work. He acknowledges this a bit in "The Writer's Tale," and coupled with the ridiculous workload and responsibility that the show saddles him with...well, it's no wonder that he's quitting now.

Previous to reading the book and watching "Bob and Rose," I was just happy that Russell T. Davies would no longer write for "Doctor Who," leaving behind a legacy, a fan base, and a story arc that a more disciplined writer (Steven Moffat) could inherit.

I'm still happy about that...but now I'm eager to see what Davies comes up with next. I think that with a less schizophrenic format and a brand new start, he could come up with something amazing. And now that he's famous, maybe shows like "Bob and Rose" will be appreciated.

PS: The show's funniest moment so far. The desperate female pack go to a straight bar in order to pick up men. One of the women yells "There's a man in a rabbit suit!" A ridiculous man on the dancefloor -- who is indeed wearing a scruffy rabbit suit -- pouts at the women and flips his floppy ear.

All of them go "Awwwwwwwwwww," as though this were just the cutest thing. 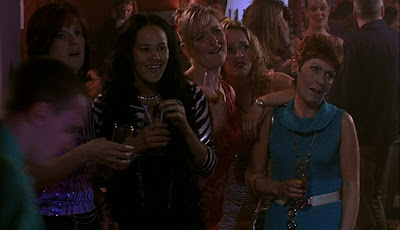 Well, you have to see it yourself. Like so many moments in the show, it speaks volumes in a simple, ridiculous scene.
Posted by Adam Thornton at 8:14 PM

How exciting! I'm definitely going to check out 'Bob and Rose' now.

If you haven't seen it yet, 'Jekyll' written by Steven Moffat is outstanding. James Nesbitt doesn't actually wear prosthetics or heavy makeup to do the switch between man and monster.

As an added bonus, in "Bob and Rose" you see several of the same performers who ended up in "Doctor Who" (due to RTD's influence).

It's weird to see Harriet Jones ("We know who you are") as Bob's mom, humourlessly preparing packages of safe-sex materials for gay bars. But it's even creepier to see "the goblin in the corner" (from "Midnight") as the sweet, slightly bland, struggling Rose.

Where did you see Jekyll? I'm really curious...

I initially saw it after some kind gentle person on the internet shared it with me via a Bittorrent client. However, one can purchase it from Amazon.ca.

I tried both Generation X and Jumbo Video online, and came up dry, sorry...

Must check out both B&R and The Writer's Tale now. Gary Russell's book had a lot of interesting tidbits but like you, I'm most curious about the writing.

A procrastinator, then? Aha... That could explain why a number of his stories have seemed a bit, well, not thought out enough.

The actor who played Rose's boyfriend is also on the bus in "Midnight," which I saw for the the first time this week. He plays the father of the sullen teen.

Love to know what you're thinking about "The End of Time." For me, too much bombast and spectacle, not enough wit and clever plotting. But it's early innings yet, as they say over there.

I did see the "Next Doctor" and "Dead Planet" specials, but nothing afterward...I might just wait until the DVDs come out next month, I sort of ENJOY the wait. Plus I'm worried I'll be disappointed!

I have heard other people mention "the bombast," however...

And I think "Midnight" is one of my favourites, right up there with "Gridlock."

Totally agree with your observations about "Bob & Rose".

I stumbled onto B&R one day, watching the first episode out of curiosity, and then finding myself so delighted and drawn into the other 5 episodes in rapid fashion to follow the twisting and turning love story between two people so obviously right for each other navigating how their life and others and their own notions and confusions play out in their romantic "discovery process". Entertaining and kept on the edge of my hopeless true love romantic edge of my seat from beginning to end (which was a bit sappy, but swiftly so and satisfying).

As a student of story construction and film production, I was totally WOW-ed, in all aspects-...an original, unexpected yet simple story arcs , interweaving just enough auxiliary pieces to a great core story; great direction and tight, clever editing; characters and their actors so real, so nuanced, so good; scenes, situations, lines so identifiable and witty and unexpected, just right blend of comedy and drama... (I could go on, and on...)

Not perfect, but close to it. The second half is a bit extraneous. Otherwise, best constructed and entertaining television saga hands down for me.