Apples for the Unemployed 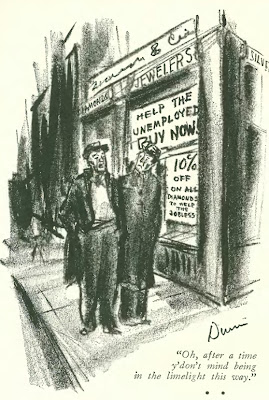 Having -- like most of the rest of the country -- concluded that the newly-born depression was no big deal, The New Yorker, managed to virtually ignore it until November 1930. Then, suddenly, the paper was FULL of depression references...to apple sellers.

Cartoons. Comments. Little snipes in otherwise unrelated articles. I don't know if the apple seller scheme -- the International Apple Shippers Association sold apples to the unemployed at a loss, putting an "apples for the unemployed" vendor on virtually every New York street corner -- actually worked, but it certainly seemed to put a visible face on the worsening depression, and it also annoyed a lot of pedestrians in the city. Those with jobs, anyway.

Another source of depression news in the paper were the ever-present full-page advertisements for the Evening Standard, which basically said "These troubles will be over soon, and the only firms which will survive are the ones which continue to advertise!" The Evening Standard was truly making lemonade in response to the lemons...or at least grinning while eating the lemons raw.

I leave you with a poem called "Confession" by Richard Peckham, from the November 29, 1930 issue:


It may be shameful to avoid
The apples of the unemployed
But, since they've been on every corner,
I have become an apple-scorner.
Snow, McIntosh, and Northern Spy
Are now as painful to my eye
As pencils and shoelaces were
When apples were uncommoner.
An antisocial state of things,
I know. It will not earn me wings.
But why, when wits were being deployed
To get the unemployed employed,
Did no one, to whom things were clear,
Distribute, say, light wines and beer?

Posted by Adam Thornton at 7:10 AM