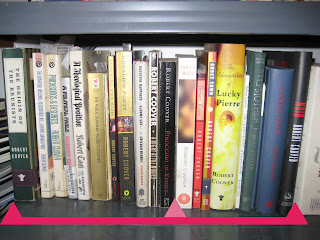 "Pinocchio in Venice" (1991) was the first Robert Coover novel I read. Having just finished it now for the third time -- and in the midst of a chronological re-reading of all his books -- I can best sum it up as...weird.

It's "weird" because it's an uneasy mixture of his already well-established styles, and because it comes perilously close to actually "saying something," which few of his books ever do. I'm not entirely sure WHAT (if anything) it is trying to say, but if you pressed a gun to my head and demanded a moral, I might just say: "Selfish prigs are bound to suffer, both outside (because people resent their priggishness) and inside (because prigs cannot achieve the high standards they set for themselves)."

Part of the book is -- simply -- a playful reinterpretation of the Pinocchio story. By claiming that all of Pinocchio's adventures (somehow) happened in Venice, Coover can push the well-known character (now an ancient and venerable scholar) through all of his old haunts, where his friends and enemies are far more complex than we'd ever thought. Coover takes the black-and-white morality of the original book and applies it gruesomely to the more "human" characters in Venice, and suddenly the Blue Fairy's moral lessons and Pinocchio's upstanding actions seem as sinister as...well, moral ideologues really ARE in real life, when their beliefs collide with flesh-and-blood.

The book's first third is in Coover's "languid phantasmagorical" style, wherein Pinocchio -- returned to wintry Venice to write a manifesto which summarizes all his moral precepts -- suffers a series of terrible indignities, either thanks to long-ago villains or his own personal failings (which might best be summarized as lust, ease of distraction, and an unyielding priggishness). This style also returns in the final third, which is more "frantic phantasmagorical," wherein Pinocchio's sins REALLY come out to get him. And...err...he gets baked into a donkey-shaped pizza.

It's the section between these two thirds that I've never really liked, mainly consisting of meditations on art and theatre, subjects which Coover has been dabbling in since "The Public Burning." It reads like an essay and a "guidebook to Venice," made even more tedious by the fact that the protagonist has been rendered totally immobile through most of it. Many of Robert Coovers novels seem to be about 15% too long, but while in other cases this tends to manifest as a protracted ending which tries to cover its tracks by being as ambiguous as possible, in "Pinocchio and Venice" the extraneous pages are all in the middle, and caused -- perhaps -- by Coover trying to say too much.

Then there's the ending, the final chapter which -- after 300 pages of playful allegory and abstract theorizing -- is an ACTUAL HONEST-TO-GOODNESS STORY. It contains exposition and straight-forward revelation. It's beautiful and moody and strange, yes, but it also adds to the book's confusion as a whole: if there was never supposed to be a point, why did it end like that? If there WAS supposed to be a point...what was it?

At its best, "Pinocchio in Venice" is an adventure story, overlaying a deconstruction of the original children's book, and also combining the unrealistic morality of the children's book with the facts of the real world. At its worst it's...well, an awkward partnering of those "best" elements with dense art criticism interspersed with repetitive action sequences. I wouldn't consider it to be an essential Robert Coover book, necessarily, but it's an interesting experiment nonetheless (and darn fun when it works!)
Posted by Adam Thornton at 1:29 PM