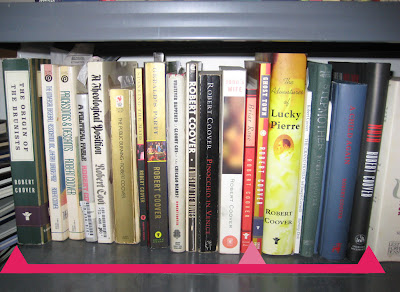 If "Briar Rose" (1996) appeared in a collection of short stories, I would probably appreciate it more. There is something about a "book" which implies depth and weight. "Briar Rose," sadly, holds neither of these things, and it's the only Coover book that I previously owned but which I never bothered to finish. Much like "Spanking the Maid" (1982) it's what everybody assumes Coover always does, but seems -- when compared against the rest of his work -- lightweight and sort of frivolous.

It shares the same structure as "Spanking the Maid," a narrative which shifts focus between two protagonists (the Prince and Sleeping Beauty) as they repeat the same actions endlessly without ever achieving their goals. The Prince wants to rescue Sleeping Beauty, but he's trapped as much by the briar hedges as he is by his doubts: is he the one? Is she the one? Is he accomplishing his tasks properly?

Sleeping Beauty, likewise, is enduring a hundred-year sleep in the company of a good/evil fairy. The fairy tells her stories about all the possible Princes and the possible resolutions to the fairy tale, invariably terrible. Usually these hypothetical princes are already married, and their wives kill Sleeping Beauty and eat her. Sometimes the princes wake her up only after having fathered several children by her while she was sleeping. Some princes only want her property, or they turn into monsters when they kiss her.

Every second (large-print, small-margin) page is basically a resumption of the tale with a new twist. This is Coover's "phantasmagoria" approach, which reads like a fever dream but -- sadly -- has little else to recommend it, especially when you've already read his similar short stories in "Pricksongs and Descants" (1969) and "A Night at the Movies" (1987).

If you have a burning love for fairy tale deconstruction, this could be a good book (in the same way that "Spanking the Maid" has been cited as the ultimate text for S&M devotees), but otherwise it's Coover at his laziest. It lacks the invention and passion that he injects into better examples of this style (eg. "The Magic Poker" and "The Babysitter"), and also lacks the satire and political consciousness of Angela Carter's fairy tale treatments.

"Pinocchio in Venice" was dedicated to Carter just a few years before, so maybe this was an homage of some kind, though Coover had tackled fairy tales before ("The Door," "The Gingerbread House") and would come back to them again in "Stepmother."

Typical Coover themes in "Briar Rose": Repetitious scenario with disconnected geography & time, characters can never succeed because the rules of the scenario are unspoken or more complicated than first considered, scatology, idealized situations become disgusting/horrific when subject to real life.
Posted by Adam Thornton at 7:51 PM