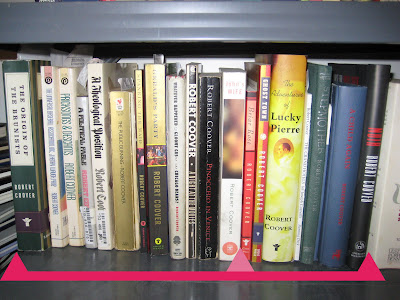 Robert Coover's novels tend to come in one of two formats: either they're teeny-tiny books with huge text and wide margins (glorified short stories), or they're larger books with minuscule text, non-existent margins, and the smallest possible space between the lines (deceptively epic tomes). The fact that Coover tends to have a high "bulky paragraph" to "terse dialog" ratio makes the latter type of book particularly long.

"John's Wife" (1996) is ENTIRELY composed of bulky paragraphs. It never settles down and it never lets you rest. Its 420 pages feel like twice that many, and in a more sensibly formatted book they probably would be. But there's so much invention in it that you'll never feel the drag...unless you become hopelessly lost, which is possible, especially the first time through.

First, the structure: "John's Wife" is a book-length string of big paragraphs. Each paragraph focuses on a particular character, and the story flows between paragraphs as the characters encounter each other, think about each other, or when the plot naturally moves in that direction. These paragraphs come in unbroken sections about sixty pages long, but the separations between these sections -- a simple double space -- doesn't seem to serve any purpose. The story is one shifting character focus from page 1 to page 423.

These characters all live in a quaint midwestern American town, and -- as you'd expect in a small town -- they all have some connection with each other: parents, children, spouses, workmates, golfing buddies, drinking partners, and the professionals they deal with (a doctor, a lawyer, an accountant, the newspaper editor, the town photographer, etc.)

The town's biggest booster is John, a hedonistic businessman, son of one of the founding fathers, frat boy, continually shaping the town by buying up and then over-developing property for maximum profit. John is the strongest motivating force in the town...

...with the exception of his wife. She's nameless, simply "John's Wife." The center of everything. Beloved by everyone. Half the men in town are hopelessly in love with her, and most of the women admire and respect her. Considering the book has about fifty major characters -- explored serially and organically as the book goes on -- there's a lot of "John's Wife worship" in those pages.

The curious thing is that John's Wife is the only notable character who is -- quite pointedly -- never explored. Everybody talks about her but she never earns a paragraph for herself. We learn about every other character's hopes, dreams, activities, and darkest secrets...but not her. She appears and (literally) disappears, setting things in action and then wandering into another paragraph to motivate somebody else. But she's the only person in town whose head we never get a look inside.*

What's "John's Wife" about? It's about everything that the characters care for: love, sex, power, life, hatred, art, philosophy, and survival. It's about the things that motivate these townie characters: infatuation for John's Wife, lust for revenge, craving for affection, dark regrets which cannot be forgotten. The novel is, in short, about the deep-down things that obsess us.

The first section of the book is an amazing study of how people motivate themselves to get through the day -- the sort of thing Coover wrote so truthfully about in "The Origin of the Brunists" (1966). We learn how all these characters know each other, the common touchstones they share (John's stag party in particular), and their own personal foibles which roar around in their brains: housewife Veronica, for example, is unable to forget the fetus she aborted when she was a teenager, and unable to forgive the man who fathered the child. Marge is driven by her need to finally win a contest -- any contest -- against John. Ellsworth (the newspaper man) is using his unwritten novel to try to understand the relationship between artists, models, and audiences. Poor teenage Jennifer has a hopeless crush on John's business partner and fantasizes about running away with him.

This is fascinating enough, but after 160 pages the town begins to unravel. It begins with the strange behaviour of John's Wife herself: sometimes she disappears when people aren't looking at her, leaving nothing but her car (or her clothes) behind. Latent murderers begin to make all-too-serious designs on the lives of others. Ellsworth is terrified to discover a new character lurking in his book's pages, and Stu's dead wife -- who he killed years ago -- reappears as a ghastly and blazing-eyed ghost. Meanwhile Pauline -- the novel's most tragic character -- is growing to a surprising size in the photographer's studio...

I don't want to tell you any more because part of the book's joy is the shock at every new twist: the way the yearnings and regrets of these otherwise normal characters become hideous reality as the book goes on. Eventually time and geography begin to collapse, and as an all-too-familiar monster finds herself under siege in the middle of Settler's woods, the town goes absolutely bonkers. Events move to their natural end in a way that only Coover could manage. Fire, disaster, storm, accident, death, destruction. And a huge part of the forest soaked with urine.

The book ends with all of the characters newly matured...the town has healed and so have the people who live there. They're not better than they were -- some of them are in a new kind of private hell -- but everybody seems to know a bit more about themselves. John continues to buy and renovate property, John's Wife returns and brings everything back to a state of normality, and the impossible events of the previous (day? week? month?) recede into the legends and tall tales that make a town unique.

"John's Wife" is a non-stop burst of creativity: characters, events, collisions, distortions, it never ends, and -- now that I've read it a second time and I have the characters straight in my head -- I think it's Robert Coover's masterpiece. It has the best of his realistic writing, and also the best of his impossible stuff, with both extremes perfectly meshed in an utterly flawless structure.

That said, it's a damn frustrating book, especially the first time through. It's easy to mix characters up and forget where they've been, dulling the ironic beauty of events seen through dozens of different eyes. It's also easy to lose sight of the subtle and beautiful surprises that are lost in the surrounding bombast: the really complex and unusual stories of Corny and Beans, for example; the former one of the most rich characters in the book, and the latter a strange and significant footnote that the casual reader will miss altogether.

Common Coover touches in the book: the warping of time and geography, lots of different spouses screwing around on each other, toilets referred to as "stools," dense meditations on art and philosophy (though nicely spaced out this time), a comical cowboy character, women with big butts, metaphoric darkness/blindness, lewd puns, and outrageous pantomime.

* With the exclusion of the mysterious "Sassy Buns" who wreaks male havoc during the extended climax of the book, and who may be a sort of "Anti-John's Wife." Or something.
Posted by Adam Thornton at 7:50 PM