Quick Acknowledgement of a Cooverthon 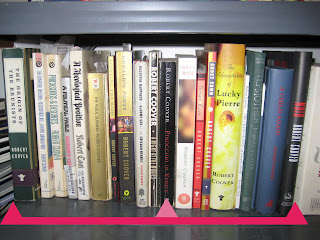 For the past six weeks or so I have been engaged in a Cooverthon...that is, I've been re-reading all of Robert Coover's books* in chronological order in an attempt to get a sense of his development and his themes.

Doing this same thing with John Barth a few years ago pretty much destroyed my enjoyment of his work, so I'm aware that this is a dangerous and stupid thing to repeat with another of my favourite authors. One reason I'm doing this is to prove to myself that I didn't sell John Barth short; that other authors CAN stand up to such a rigorous and exhausting re-reading without becoming repetitive.

In some ways, Coover has an edge on Barth because his fiction is so unabashedly repetitive to begin with. My impression after years of fandom has been that -- following "The Public Burning" -- Coover used the same structure over and over again in all subsequent books: a protagonist is stuck inside a nightmarish (and usually genre-specific) environment from which he cannot escape, and as the book progresses the environment becomes increasingly horrifying.

That assumption was incorrect. Coover has been dabbling with that "nightmare" structure since his 1969 collection "Pricksongs & Descants," and while the structure DOES become a regular background feature of most of his subsequent novels, those novels ALSO contain many other novel elements: distinctive characters, bizarre authorial quirks, new types of focus.

We'll see if that impression continues to hold as I make my way through "Pinocchio in Venice" (1991) for the third time. Halfway through "Gerald's Party" (1986) my enthusiasm flagged a bit -- particularly discouraging because it has always been and still remains my favourite Coover novel by far -- but that's to be expected: most of Coovers books are INTENDED to exhaust you ("Gerald's Party" more than most).

I wish I'd rigorously blogged the earlier novels while I was reading them (and I wish I could guarantee that I'll continue to blog them as they come), but here are some scattered impressions:
And now, a list of common Robert Coover themes.
* ...with the exception of independently-published pieces, which are difficult and expensive to find.

Posted by Adam Thornton at 7:43 PM