I was leaving my apartment the other morning when I noticed something grey on my wall. It was about a centimeter long, somewhat diamond-shaped...and it was MOVING. I had accidentally discovered The Horrorbug.

Reader, put down that hotdog before you continue, because this is just awful.

When I got closer I saw that the back-end of the creature -- the big, bulky part of it -- appeared to be a mutant housefly: partially-formed, covered with little grey hairs, the wings small and stubby. Poking out of the fly's neck -- where its head should be -- was the front half of a long, worm-like, six-legged insect. This insect was inching its way up the wall, alternately stretching out, then humping up the carcass behind it.

I ran to get my camera, which is unfortunately not suited to close-up entomological study. Here is The Horrorbug, on my wall, rotated 90 degrees counter-clockwise: 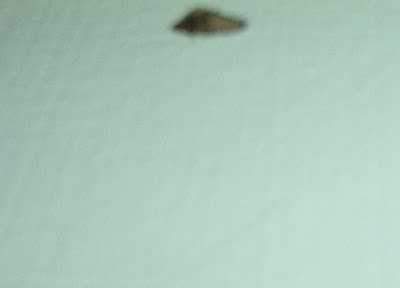 The protruding black smudge on the left is the head of the insect, partially withdrawn because I'm scaring it. The rest of it is the mutant fly-carcass that it's dragging along.

Using the tools of a seasoned insect researcher, I trapped it inside an empty cassette case and left for work. When I came home it was still alive, crawling around in its strange inchworm way. It seemed to want to hang off of the ceiling of the cassette case: it would climb up, secrete some sort of sticky substance, and then retreat back inside the carcass, leaving me staring down into the little hole where the fly's head used to be. So I'd knock it down and watch it crawl around some more. 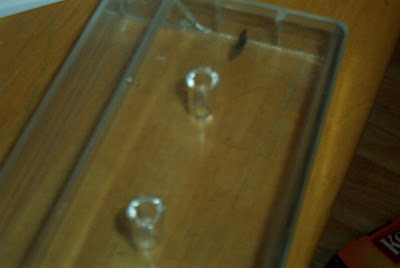 I've done a lot of Googling to try to figure out what I've found, and I think it's what's called a "pupal parasitoid." These ghastly little parasites are injected inside the pupae of other insects, where they leisurely eat and grow.

More specifically I think that The Horrorbug is pachycrepoideus vindemiae, a wasp that actually parasitizes DEAD pupae, which would explain why the fly carcass it's pulling around looks so old and stunted; the pupae is probably an also-ran from that brief fly infestation that I had a few months ago.

I can't find any more information, however. These pupal parasitoids don't generally REMAIN in the pupae (as far as I can tell), so why is The Horrorbug still carrying this one around, treating it like a shell or a cocoon? How does it poop? Why does it want to hang off the ceiling? WHAT DOES IT PLAN ON DOING NEXT?!?

The Horrorbug hasn't moved for two days. I wonder if it's dead, or if it's just being crafty.
Posted by Adam Thornton at 9:02 PM

Yeeek. Yeah, as ghastly-sounding lifecycles go, parasitic wasps are way up there with those things that eat and take the place of the tongues in their host fish.

The fish-tongue parasites! Has anybody figured out what those things are called yet, or are they just figments of the "Parasite Rex" imagination?

Yes, those wasps are AWFUL. But I didn't think they'd stoop to living inside a fetal corpse. It still hasn't moved, and my desire to throw it away is competing with my desire to see if it's going to climb out looking all beautiful.