In 1920s New York, you were an absolute NOBODY unless you could score theatre tickets. Opening nights were all the rage, and even though writers for The New Yorker consistently make fun of the people who go to opening nights -- portraying them as brash and obnoxious social climbers or star-gawkers -- those writers seem to go to an awful lot of opening nights themselves.

It was difficult to get tickets because, quite often, "speculators" (who we now call "scalpers") would buy huge numbers of opening night tickets and then re-sell them at a profit.

Curiously, theatre owners had a sort of clout that they don't have today, and they took the position that only THEIR box office should be allowed to sell tickets, and anybody else who did was breaking the law. After some legal wrangling around 1925 it seems the theatre owners lost that privelege, and though police were prosecuting the speculators they couldn't quite keep it under control.

Then came the "Theatre Service" companies, which were basically regulated scalpers. They operated out of actual stores and sold their tickets at only a modest markup. 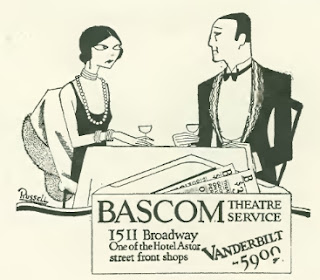 The Bascom theatre service advertises consistently in The New Yorker, usually featuring the same selection of cartoons, with slightly re-written captions. This particular cartoon always makes me happy; that woman looks SO angry, and she actually resembles my cat in her worst moods. All she needs is a pair of ears lying flat back.

The gist of these advertisements are always not so much that people will suffer if they don't get tickets to a play, but that people will suffer embarrassment for not knowing that Bascom exists, which is a strange approach to take...but probably effective for the guy who was being pressured at the last minute to find a theatre service with tickets to a particular show.
Posted by Adam Thornton at 7:57 AM