The Barthathon: "The Friday Book" 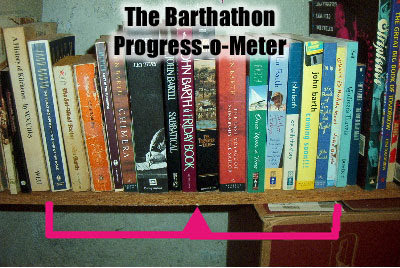 My first problem is that I'm not a huge fan of essay collections. I'm not much interested in theory, so long essays about postmodernism versus modernism are going to leave me pretty cold. Even when they AREN'T desperate and wanky.

My second problem is that I'm not a huge fan of "The Thousand and One Nights." I read the first volume in preparation for tackling "The Last Voyage of Somebody the Sailor" a few years ago, and I found the stories to be repetitive and colourless: cardboard characters, rudimentary motivation, and every woman described as somehow rivaling the moon in beauty...which is sort of hard to picture. I have no doubt, however, that my two fat "Penguin" volumes were heavily edited. Maybe I missed something.

Since I don't share Barth's love of (or rather, somewhat creepy obsession about) Scheherazade, I'm not absorbed by speculation about her menstrual cycle. Since I'm not very concerned with Barth's definition of "postmodernism," I'm not absorbed by his essays and lectures about the subject. In short, though it contains many wonderful insights, I wasn't awed by "The Friday Book" (1984) in general.

My basic stumbling block was the constant repetition of Barth's personal interests. These pieces were written and performed for diverse audiences, and therefore they tended to come back to the same themes and plunder each other (right down to individual quotations and the same set of phrases) without fear of being boring. This is to be expected, but it's obnoxious when you know what's coming next..."ah, it's that Khakheperesenb quote again." His quips and quotes were apt and brilliant the first time, but they get old the second time around.

Also (to continue my issues with the basic structure of the book) I got tired of his oft-repeated reference points: Virgil, Homer, Kafka, Borges, Gass, Borges, Joyce, Nabokov, Borges, Hawkes, Gardner, Marquez, Cervantes, Flaubert, Chaucer, Dickens, Borges, and Borges. These are important figures, and Barth obviously thinks about them an awful lot, but after a while his ruminations got tiresome.

In short: do not sit down and just read "The Friday Book" from cover-to-cover, especially not during a single week, with the almost Barthian desire to actually FINISH it on Friday. Which I did, because I'm on a mission.

If you pick and choose essays, however, I think you'll enjoy the book an awful lot. Barth has a unique, intelligent, and witty insight into the literature that he reads, teaches, and writes. His comparison of crab-art with historical novels is fascinating, and his many comments about "Chimera" have made me want to go back and re-read it...there's obviously more to that book than I'd thought.

He also has a strikingly individualistic approach to society, politics, and art; far from a knee-jerk leftist or reactionary, he seems to have charted his own path (much the way the heroes in his fiction do). Instead of either deriding or triumphing any particular point of view, he explains how the viewpoints work, how they don't work, and then he suggests methods of their improvement. I particularly like his comments about innocence:

One should be no great admirer of innocence, in either narratives, individuals, or cultures. Where it's genuine, after a certain age it's unbecoming, off-putting, even freakish and dangerous. Where it's false, it's false. To admire it much is patronizing and sentimental; to aspire to it is self-defeating. Let us admire--in cultures, narratives, and people--not innocence, but experience and grace.

I bet he was a great professor.

Another of Barth's virtues is his ability to clarify his points after the fact, and to admit when he's changed his point of view. Since these essays were written over a twenty-year period, it's unsurprising that he'd change his mind about a few things. Barth DOES have experience and grace, and both traits come through in this rich (but clunky) book. Skim it, carefully read the selections that interest you, and then go and explore those amazing authors he so desperately loves.

All the traditional Barth themes are here, and expounded upon, and repeated, and then analyzed...multiple times. His autobiographical memories of twinhood -- he was named "Jack" and his twin sister was "Jill" -- shed light on a number of his literary obsessions and foreshadow (if I remember correctly) parts of "On With the Story." He also exploits a theme that was only first explicitly mentioned in "Sabbatical," that is, the occasional need to go back in order to go forward.
Posted by Adam Thornton at 1:10 PM

Aha! That is a fundamental difference between you and me. Thanks in large part to you, I know that I have an outlier talent for reading. But I am no writer. As a consequence, MY writing heroes tend to be crude hacks who somehow lucked out into leaving a mark on the world.

eg Someone I was curious about today, thanks to being forever linked to Isaac Asimov due to the I,Robot connection:
http://www.gwillick.com/Spacelight/binder.html

There's a lot to be said for the crude hacks! And also for the underdogs who have been forgotten (I have a particular affection for them!)

I'm pretty sure I've had a brush with the Adam Link stories somewhere along the line. Though I've never been a big fan of science fiction, I AM interested in the HISTORY of science fiction, and I've read a bit about the forerunners. Looks like Otto was one of them.

My writing heroes, though, really do tend to be the dedicated authors that I listed...people who wrote as though possessed.