The Barthathon: "The Tidewater Tales" 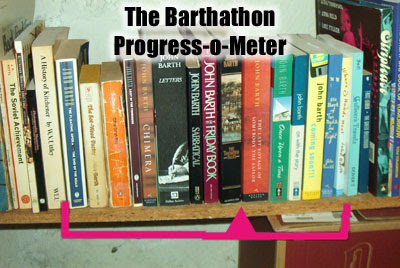 "Sabbatical" was the “twin” of "The Tidewater Tales" (1987). This isn't unusual, since all of Barth’s books have been twinned, but these two were closer than all the others before them. The situations, settings, time-frames, and issues were almost identical. Was that a cop-out? After Barth wrote “Sabbatical” as a sort of post-Letters cost-recoup for his publishers (as he mentioned in “The Friday Book”), did he then say “to hell with it,” throw away his unimpeachable literary integrity, and publish the same old book a second time, greatly expanded?

I thought so at first. Suffering from a certain Barth-fatigue -- I've been reading ONLY his books since July, remember -- I limped through the first hundred pages with an unhealthy skepticism, sustained only by my memory of loving the book the last time I read it (in 1994, my first Barth novel). As Sabbatical was about a couple in crisis, sailing around the Chesapeake bay to resolve the worries of childbirth, adulthood, mortality, story-craft, family, and world affairs…well, “Tidewater Tales” brought us Peter and Katherine. A couple in crisis. Sailing around the Chesapeake. Trying to resolve those exact same worries. Again.

To make matters worse, the couple – typical witty, in-love, sexually open-minded Barth-style adults – discovered installments of a “Sex Education” television play, which they proceeded to read to the reader…and which was, in a word, dippy.

Barth got miffed when a journalist said that the poem in “Sabbatical” was dippy – that is, sort of bad and flakey – to which Barth replied that the poem was written by characters who were not poets, so of COURSE it wasn’t very good. Since “Sex Education” was not written by a well-heeled playwright, it was also bad and flakey...but unlike the "Sabbatical" poem it was also quite long and integral to the "Tidewater Tales" plot. And while “Tidewater Tales” was, among other things, about people striving to hone their writing and storytelling skills, “Sex Education” was SO dippy that it’s bound to annoy many readers, especially if they’ve previously read his short story “Night Sea Journey," of which this is sort of a goofy, poorly-conceived sequel.

But there’s a funny thing about Barth: his best books tend to contain annoying elements...which are later consciously redeemed. As you approach the end of the book you realize that the bad stuff is – as Barth’s characters would put it – dramaturgically required. In the same way that a character must be bad before she can ultimately achieve redemption, so do the Barthian elements need to be bad before they can become good.

And when they’re good…oh, man.

You see, “Tidewater Tales” reached a point – after all the C.I.A. dribble and family conflicts and dippy stories – when the tone CHANGED. Things began to come together and reveal themselves as far more complex and rich than I'd ever imagined. Tangential issues became prominent and – most amazingly – INEVITABLE.

When all the characters finally anchored behind ordinary point, amidst the warm summer night parties of hundreds of other boats, and when they all gathered together for the first time after having revealed their histories and problems and personal quirks during the preceeding bulk of the book…the story revved up. The clouds gathered. The final, long stretches of storytelling -- punctuated by the sudden and tragic storms of grief, anger, loss, anguish, yearning -- brought everything and everybody together, and IT WORKED. I celebrated with the fictional characters. The book was redeemed, its several points exquisitely made, the end.

And yes, I cried at the conclusion of “Sex Education,” I admit it. And I’ll also say, as part of this “redemption” theme, that there are very good (“dramaturgically relevant”) reasons why “Sabbatical” was so similar to “Tidewater Tales.” They are linked in a way that is nothing short of brilliant. Long live Barth, and his characters, and his tales!

Having said that, however, I have a personal message for Mr. Barth himself: lay off Sheherazade, will you? I understand that you have an outright obsession with the character – and that’s fine – but have you ever noticed that OTHER PEOPLE don’t share your enthusiasm? It’s one thing for one or two of your characters to reveal themselves as long-time fans of "1001 Arabian Nights," but when EVERY literate character in "The Tidewater Tales" turned out to gushingly consider her to be the end-all be-all of literary creation, your enthusiasm went beyond “barely-in-control” and into “outright masturbation.” When I realized that I’d have to sit through a 20-page analysis of her menstrual cycle (as ALREADY explored by you in “The Friday Book”), I decided it was time for you to enter Sheherazade detox.

So stop it. Please. I have more of your books to get through and I don't want to deal with Sheherazade again.

“The Tidewater Tales” did inspire me, once upon a time, to read “The Odyssey,” “Don Quixote,” and the first half of “1001 Arabian Nights." You don’t need to read them before tackling this particular book – because unlike “Chimera,” Barth gives an excellent gloss here for those uninitiated – but the characters of Ted, Diana, Donald Quicksoat and – errr – Sheherazade are much richer if you’ve read their respective books.

And that recurring theme about "the key to the treasure is the treasure?" I suspect this is something that Barth reinterprets from time to time, because now it's specifically about WORDS: Stories often feature magic words, which are the keys to fabulous treasures; but the treasures, as represented in fiction, are also words themselves ("a mountain of jewels," for instance), so the key (magic words) to the treasure is also the treasure itself. So there.

If you can explain his new mantra to me ("what you've done is what you'll do"), I'll give you a cookie.

The traditional list of traditional John Barth themes (not including those necessarily pulled over from the plot of "Sabbatical"): anthropomorphized egg and sperm, water messages, keys, Bloodsworth Island, Huckleberry Finn, "once upon a time \ there was a story that began...", the war of 1812, the myth of the wandering hero, 1001 Arabian Nights, The Odyssey, Don Quixote, twins (both babies and doppelgangers), impotence, and leeway in categorization.
Posted by Adam Thornton at 7:14 PM

Does it mean that we as human beings generally fail to learn from our mistakes, so that when you're trying to figure out how you might react in certain situations, you only need to look at similar situations you've been in in the past?

Or, you know, something more intelligible?

See, that's what *I* thought at first, but this is presented as somehow POSITIVE. And the characters do nothing in the book EXCEPT learn from their mistakes, really, so I'm totally confused.

During one of the more prominent times when this saying comes up, the person who says it assures another character that they'll eventually understand. But I don't think that character ever did, and neither did I.

Barth has, in the past, declined to describe things that he feels are impossible to describe. Which is indescribably annoying!