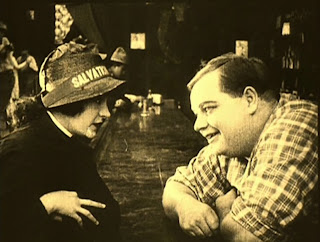 A few months ago I was forced to admit that Benny Hill -- at least, the '60s Benny Hill -- was funny. Now I'm going one further and admitting that Fatty Arbuckle and Buster Keaton were funny as well.

I rented "The Best Arbuckle/Keaton Collection" because I was curious about life in the "teens," in this case 1917 and 1918. A collection of 20-minute short films seemed like a good way to step into the past, even if I'd need to watch a lot of people get hit with pies.

Well yes, there have been some pies, and there are also some amazing scenes of New York during that time period -- Coney Island, incredible swimsuits, anti-Kaiser moments -- but more than that...well, I'm laughing. A lot. And I'm totally amazed at Arbuckle and Keaton's physical abilities. Arbuckle can really move (and is best at actually THROWING things), but Keaton? Something was awfully strange about that man's skeleton, and I bet he was STRONG. Not to mention he's the most handsome man I've ever seen from that time period; those lanky suits and rounded hats really fit him, in a funny sort of way. 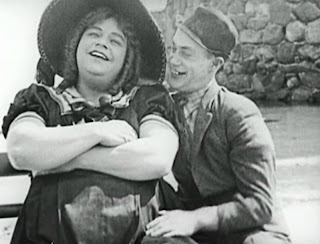 Also fascinating is Arbuckle's penchant for drag, which he seems to take a peculiar joy in (and whose sexual possibilities go surprisingly far in these films, but I suppose it WAS pre-code). "The Bell Boy" also has a blatant treatment of the mincing homosexual, similar to pretty much every other stereotypically mincing homosexual that you've ever seen on film. Black people also don't fare particularly well, as you can imagine.

By the way, watching Fatty Arbuckle mince is a very strange thing. Watching him SKIP is even stranger.

I have more to watch -- and I'll need to check out Keaton's post-Arbuckle material -- but I leave you with the "common silent comedy themes" that I jotted down while watching the first eight films.
Arbuckle's character in "Oh Doctor" is named "Dr. Fatty Holepoke." Considering the scandalous allegations that he eventually came under, that name is particularly creepy.
Posted by Adam Thornton at 9:44 PM

After I saw Sherlock Jr starring Keaton, I could live with Laurel and Hardy being hailed as pioneering comic geniuses. But Chaplin? Bah! No way. One of Keaton's speciality was the way he expressionlessly waded his way through all the incredible things happening around him. Including the front of a house crashing on top of him and he JUST happening to be standing where the brickless windows ended up landing.

Yes, besides his acrobatics, it's Keaton's FACE that is so arresting; he even looks slightly zombie-like with those weird eyes, but in a handsome sort of way.

I've always dismissed Chaplin and Laurel & Hardy. Darn it, now I have to go back and reevaluate THEM as well!