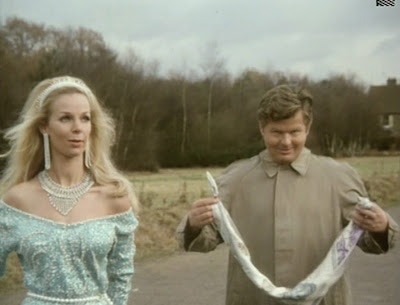 I've never seen an episode of "The Benny Hill Show" before, but somehow I've formed an opinion of what it's all about: low-brow, barely-literate, sped-up routines about sex and bums. Now that I've watched the first four episodes of the Thames Television run of the show, I can confirm that it was those things...but a little bit more. And Benny Hill really took sex and bum jokes to a new level.

The jokes are usually about sex, physical clumsiness, or awkward situations. Old people and ugly women are funny and are mistreated. Glamour girls are pursued, but when Benny finally catches one he always ends up holding somebody ugly, or a man.

If that was all there was to "The Benny Hill Show" I'd have turned it off after the second hour-long episode. But there's more. First, there's the joy of watching women being allowed to be genuinely funny, and not just in a "dumb blonde" sort of way...they actually have substantial parts, at least some of the time.

Then there are the "patter songs," which are actually quite clever and at least relieve the monotony. And don't forget "The Ladybirds," who sing one song an episode and who are always placed in the most awkward positions, in the ugliest clothes: 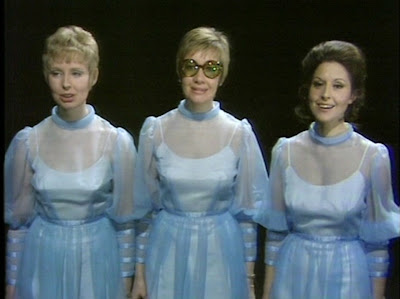 The one thing I was REALLY wrong about was my assumption that Hill's humour was "barely literate." Far from it. When he's engaged in satire (particularly of television) he can actually be -- believe it or not -- SUBTLE. He can also calmly ad-lib with the other entertainers, and he has an excellent singing voice, and even when he's easing in another word to describe breasts ("dumplings," "parakeets," or simply saying "she's a big girl!"), he does it in such a broad, exaggerated way that it's hard to see him as a disgusting lech. Which apparently he wasn't.

So I'm going to give the next four episodes a try, and even though I know I'll grow sick of the over-cranked "Yackety-Sax" chase scenes, and the bum jokes, and the old guys getting slapped...well, I actually think Benny Hill is pretty funny. In small doses. Some of the time.
Posted by Adam Thornton at 8:03 PM

I've enjoyed Benny Hill too. I think he represents the tail-end of the British music-hall tradition, which delighted in that type of humor. I wish I had that bio of John Osborne with me, because the author details (in discussing how Osborne built the character of Archie Rice in "The Entertainer") how British music-hall entertainers delighted in words--and not just for their double-entendre uses.

You've hit the nail on the head--you can't take much of Benny in one sitting.I got the first two collections on DVD and then realized if I put them on the shelf between viewings, I'd never be able to figure out where I left off watching them.

When I was in High School, they played BH re-runs nearly every night, and I watched every one.

Yes, OK... I was a high school boy and the sexy gals definitely figured in to my loyalty. But a significant portion was due to that wonderful British talent for being zany and subtly intelligent at the same time. (CF Monty Python, whose players were inspired by The Goon Show, where Peter Sellars got his start.)

With that said, I doubt I'd get more than a couple hours through it today... Unless maybe they were to re-run it once a week on a cable channel.

Aha, the BRITISH MUSIC ALL TRADITION. I'm going to have to look into this. Part of the fun of Benny Hill is how strangely alien the format is, but now that you mention it, it's TOTALLY music hall.

And now that you've mentioned words I can definitely see what you mean. Word games abound. He does a "Lover's Stew" song, where all the ingredients have different meanings when pronounced in strong regional accents: "Some mint for all you mint to me," "Lettuce, because your parents wouldn't lettuce," etc.

Not to mention his Chinese character. The interviewer comments on how he "wiggles his r's." "I been sitting down, how you know, stupid illiot?"

There is definitely a British zaniness feeling to it; I'm thinking mainly of the "awkward sketches" featuring incompetent hosts who get everything horribly wrong.

The women are certainly of the '60s British "dolly-bird" mould. What amazes me is how he can get his musical guests involved in ribald humour.

Parakeets? ! I'm strangely intrigued.
I remember feeling sorry for the little old man who was always the brunt of the jokes. Yes, I know he was a paid actor, but man he looked frail.

Benny rules OK. Check out the sketch where he plays not only every member of the Rolling Stones but teenage girls in the audience as well! Another great one is where he plays an upper class lady giving a TV interview via satellite, with the time delay she ends up answering the question before last, with hilarious consequences.