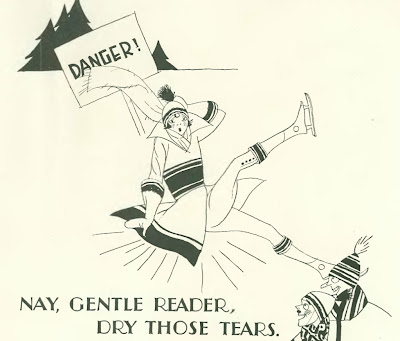 I'm continuing my survey of early New Yorker advertisements with this one from Watson Stabilators.

I'm not sure exactly what a "Watson Stabilator" was, but I can take a guess. I'm assuming that cars in the mid-'20s had pathetic shock absorbers...coupled with uneven road surfaces this must have made for a bumpy ride.

So if you wanted to make your ride smoother you'd have to buy a third-party shock absorber, this being in the day when you could still mix and match the parts of your car with relative ease.

The "Watson Stabilator" advertisements are of the "funny story" variety that I keep coming back to, and they often involve people who have suffered some kind of injury. Instead of feeling sorry for these people, we're told that they're used to being injured because they don't have a Stabilated car. All in fun, though maybe folks with a mild S&M steak might enjoy these in particular.

It's just too sweet of you to be so sympathetic, but really the emotion is misdirected.

True, the lady's pride is somewhat dented, but she is entirely undamaged otherwise--or should we say elsewhere?

You see, her system has developed a complete immunity to jolts and jars, however violent. For she is one of that strange band of Spartans who subject themselves to continuous discipline by driving un-Stabilated cars. What is an extra bump here and there to one who would rather take her dozens daily than do her daily dozen?

Apparently "daily dozen" referred to a person's morning exercise routine. It was coined by Walter Camp in the early 1900s, referring to a set of twelve specific calisthenics.

By the way, I'd bet dollars to dozen that the illustration was drawn by Johann Bull, one of my favourite New Yorker cartoonists. This isn't his usual style, but the noses of those laughing collegiates are pure Bull.
Posted by Adam Thornton at 7:14 AM