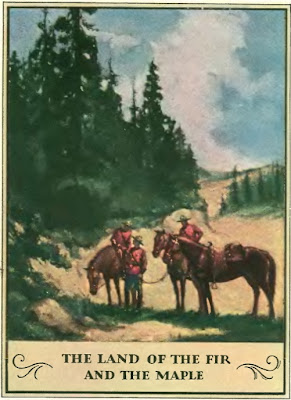 I have to admit that, while reading every issue of "The New Yorker" as part of my morning wake-up routine, I don't read every single article. I skip the sports and architectural articles, while only skimming the features about automobiles, Parisian society, theatrical reviews, art openings, and anything that looks like yet another silly burlesque.

Even so I can confidently state that "Canada" only appears in The New Yorker when they're talking about hockey, smuggling alcohol, or vacationing in Quebec. Even Mexico gets more attention, especially since Lindbergh was doing odd diplomatic fly-bys of Mexico in order to improve relations (and meanwhile Hearst -- the 1920s Fox News -- was publishing jingoistic stories to stir up anti-Mexican sympathies).

Imagine my surprise at finding, in the January 28, 1928 issue, an ENTIRE PAGE devoted to Canada! Though it's only for Canada Dry ginger ale:

For years, visitors to Canada had come back with tales of a wonderful ginger ale. They described its exquisite flavor--they told of drinking it in the Houses of Parliament in Ottawa, in the residence of the Governor-General, and in the Royal Canadian Yacht Club.

Friends would listen and smack their lips and ask if there wasn't some way to purchase it in this country. And the answer was always "No."

Finally, however, the demand became so insistent that it was decided to open a branch in this country, and in 1922 "Canada Dry" was officially brought over to the United States.

In quality, in purity, in the witchery of its matchless flavor, it is, indeed, "The Champagne of Ginger Ales." There is no other ginger ale like it.

Canada Dry only took off in America during prohibition, apparently because it helped to mask the unpleasant flavour of non-standard bootleg alcohols.

Unsurprisingly, prohibition was a boom time for ALL mixers; "Aquazone" has had lavish advertisements in every New Yorker issue since the first, and "Sumoro Orange" (distributed by Canada Dry Ginger Ale Inc.) is a recent newcomer as well. Both these products were unashamedly advertised as mixers...but hey, wasn't alcohol consumption ILLEGAL then? No wonder nobody took prohibition seriously.

It just occurred to me: did prohibition really start the "boom" for mixed drinks? Was it all due to the bad taste of the bootleg booze?
Posted by Adam Thornton at 7:11 AM