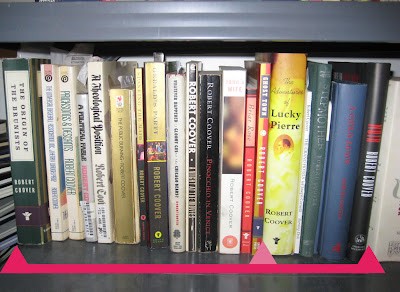 Robert Coover had dabbled with "trapped in a genre" stories before, but "Ghost Town" (1998) was the first time he extended the concept to a novel.

The genre in question is the Western, and "Ghost Town" has it all: shootouts, train robberies, gambling, cattle rustlers, Indians, loyal horses, and a climactic hanging. The protagonist is a nameless gunman who has been wandering through the desert for an unknown length of time. He stumbles upon the Ghost Town, which embodies all the classic Western cliches...and it's a bad place for a lone gunman to hang around in.

The townsfolk are a constantly shifting mish-mash of characteristics; they swap injuries, hairstyles, and body types as the book goes on, particularly the town's deputy, who undergoes a steady transformation from one page to the next. The buildings in the town shift in a similar way, with buildings moving from place to place as the plot requires.

There are only two females in town: the dancehall girl and the schoolmarm. The protagonist, of course, is constantly defending himself against the former and trying to win the esteem of the latter...and because this is a Coover novel, he suffers constant humiliation and can never live up to the standards that others require of him: he is never brave enough, never smart enough, never suave enough, or -- conversely -- never enough of a rogue. The lone gunman fails again and again and again.

And hence my first real fatigue in this Cooverthon: I'm sick of the repeated humiliation of his protagonists. He always brings them to the brink of success -- often extending the scene to ridiculous lengths -- only to have them fall flat on their faces, worse off than ever before. There's a moment in "Ghost Town" when the gunman seems to have finally won the heart of the schoolmarm, and even though his success seemed guaranteed I KNEW Coover would pull the rug out from under him.

The fact that the "rug pulling" is always done in a surprising and inventive way does not alter the fact that it all gets a bit tedious. Coover simply cannot allow his heroes to win...they can't even get a GLIMPSE of happiness without being slapped in the face. Granted, his more straightforward novels give us more satisfyingly mixed character arcs, but these "I'm stuck in a nightmarish world" books always follow the same trajectory. And that's annoying.

But still, "Ghost Town" is a fun read, with everything getting jumbled up as though it were a movie set, and some of the more unsettling moments in any Coover book (the gore is notably exaggerated here). There's also an enhanced surrealism to events that contrasts nicely with the grittiness of the situations themselves.

NOTE: In some ways, "Ghost Town" revisits Coover's play "The Kid," which appeared in "A Theological Position" (1972). It has the same collection of anonymous characters and the same tendency to "flash back" to notable past events, something unique to this book and to the play. I suspect that the long list of dedications at the beginning of "Ghost Town" are to actors who appeared in some performance of "The Kid," assuming it was ever performed at all.

Typical Cooverisms: Humiliated protagonist, confusion of time and geography, bawdy puns, a penis exposed for an extended period of time, a woman who "digs at" her crotch. But even this far into his career, he's still inventing new elements which continue to surprise the reader, even if some of the conceits are getting a little old.
Posted by Adam Thornton at 5:55 PM