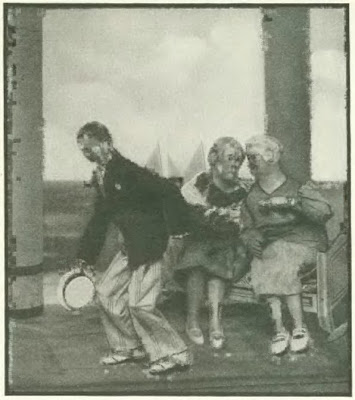 It took me forever to figure out what was going on in this picture. Eventually I realized that the two old ladies were laughing at the man because he was walking funny, and the reason he was walking funny was because his pants were wrinkled. He was crouching down to hide the wrinkles, you see.

So why were his pants wrinkled? "Because he wouldn't take a trunk," according to the Hartmann Trunks advertisement.

After all these years--think of it--still a suitcase addict! O me, o my! And not even a best friend to tell him! Perhaps you, too, have weathered the withering eyes of the Hotel Porch Brigade...the doughty dowagers who never miss a trick--who spot the suitcase customers by their baggy, wrinkled wardrobe.

So that's one convoluted mystery solved, but maybe YOU can explain why the subheading for this advertisement is "Broad-jumper's pants." It might be because the posture of a man who is hiding his pant-wrinkles is similar to the posture of a crouching broad-jumper, but that's a real stretch.

In any case, I assume it's a term that didn't catch on (much like "bidding two spades.")
Posted by Adam Thornton at 5:24 PM

he should have put his trousers in TOASTMASTER -- And It's the World's ONLY Completely Automatic Toaster! bye bye wrinkles!

A story about Muffy?