It's Called the TOASTMASTER -- And It's the World's ONLY Completely Automatic Toaster!

I suppose that The Toastmaster was a pretty amazing device in its time. Are you curious about it? SEE HOW IT WORKS! 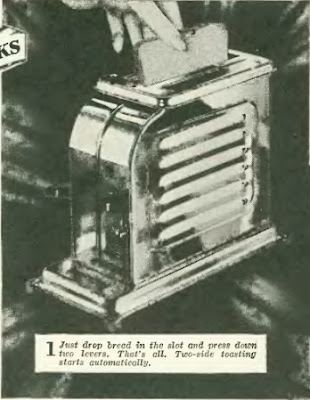 Previous to The Toastmaster, toasters required you to manually FLIP your bread in order to toast both sides. The Toastmaster did this AUTOMATICALLY...though not by flipping; it probably had two elements, one on either side, the way our modern toasters do today.

Note, however, that it only toasted one slice at a time. Maybe people didn't eat a lot of toast back then.

For some reason you needed to push TWO levers down instead of just ONE. In the next picture you'll see what appears to be different hands pushing down each lever. I imagine that The Toastmaster was like a nuclear failsafe device, requiring everybody involved to turn their keys at exactly the same time, to prevent holocaust. 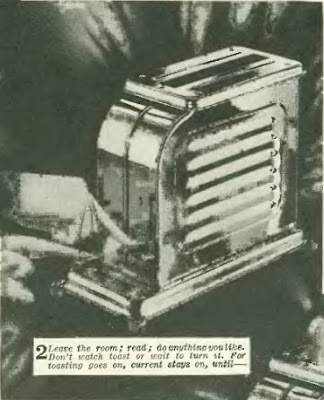 The Toastmaster didn't set your apartment on fire if you turned your back on it. In fact this advertisement specifically told you NOT to watch the toaster, as though doing so would give it performance anxiety.

Note the way The Toastmaster radiated hypnotic "toast light," even when it wasn't turned on. Maybe that's why you weren't supposed to stare at it for very long. 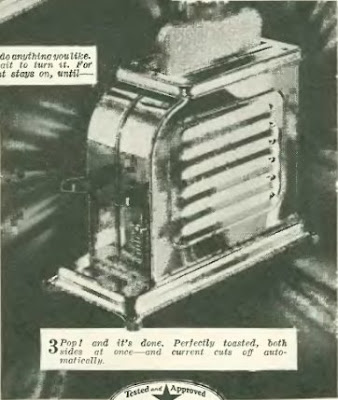 As the accompanying text said, the toast was "automatically discharged," giving you "the superlative in toast." It also implied that toasters had only been around "for two years" or so, which probably explains why this one was so crappy.

Really, though, toasters haven't advanced THAT much. I find that the biggest difference today seems to be in terminology; have you noticed that all new toasters have buttons on them that say "Cancel?"

PS: "The Toastmaster" was made by the Waters-Genter Company in 1926, though this article appears in the February 2, 1929 New Yorker. You'll be thrilled to know that there is an entire website devoted to early toasters and that they give lots of attention to The Toastmaster...they even have scans of the original instructions!
Posted by Adam Thornton at 10:45 PM

LOL!! :) Muffy, you make me laugh.
I love lurking around and reading your blog. (hmmm.....somehow that doesn't sound healthy does it?!?)
I remember my grams making my toast on that same model (I was born in 1955) when I was a child. The advertisment was right in stating that it wouldn't burn down your house if you wern't watching,however it would give you really black burnt toast....no cancel button...so you learned not to take your eyes off it too often.
The hynotic "toast light" was becasue it took so long to cool down after using it. It really did glow. That little sucker got really, really hot. Us younger kids were not allowed to use it because of the amount of finger tip burns it caused. Alas, we were not so lucky at home back then. My mom used to put the bread in the hot oven, as many slices as required, and turned them over with a fork when it was done to the desired toastiness. Is that a real word? Now days, I use a toaster that, yes, has a cancel button. I also use toaster bags that lets me put cheese between two pieces of unbuttered bread, put it into the bag, pop it in the toaster and "voilà!" in less than 3 minutes I have a grilled cheese sandwhich. Sounds gross and weird but it is really yummie.

Oh wow, Lois, you have experienced The Toastmaster firsthand!

It seems surprising to me -- having been weaned on toasters -- that anybody ever BOTHERED to make toast inside the oven. I can only wonder what people with wood stoves did...maybe they made it on the top, or had some sort of device that they could use inside the stove...more likely, though, they salted it, pickled it, and covered it with so much lard that it would NEVER burn.

"Toaster bags?" This is new to me! They're fireproof, I guess?

It's interesting that your Toastmaster recollections mesh nicely with the instructions for the device, which not only describe what both levers do (one sets the "toasting time," the other activates the electric current), but also mention that the device needs time to heat up before it's any good (which would also mean that it took time to COOL DOWN).

As a child of the '70s we had regular, civilized, two-slice toasters. That you dare not stick a fork into (kids, DON'T!)

Toasts both sides at the same time?!? Sorcery! Burn the witch.

A vision in leopard floated gracefully through our door the other summer afternoon. A religious phenomenon? Well...that's hardly the right appellation for the glowing, MUFFY ST BERNARD, is it now? With a nose as keen as her nameskae, we could not help but notice, later, that not one delicious crumb of toasted raisin bread direct from out TOASTMASTER,the World's ONLY Completely Automatic Toaster as seen on Miss St bernard's plate.

excuse the typos, i'm salted, pickled and covered in lard

At our old office we one of those nifty toasters from the '50s (I believe) which had some sort of clever counterweight system in it instead of a lever. As soon as you dropped your bread in, the slices would sink down out of sight on their own, as if by magic.

The only problem was that it was too quiet. You couldn't hear the soft whir of the lifter mechanism from the other room.

"With a nose as keen as her namesake," really, you outdo yourself Anonymous!

Eli, you have to wonder if they don't deliberately "noisy up" toasters, so they make a "tuh-CHOCK!" sound when they're done.

I have never seen this counterweight system in action but it sounds magical.