To Whom Will You Entrust Your Trees?

When you're hiring a tree surgeon, according to the March 23'29 New Yorker, you don't want to hire some lazy guy from the gutter...you want a man who can do this: 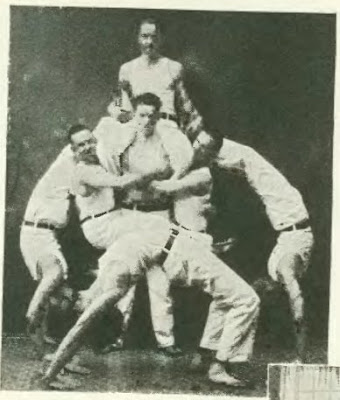 They're members of the Davey Institute of Tree Surgery "Tumbling Team," of course! Because the Davey Institute knows that tree surgeons must have "physical energy," and I guess they might want to go into Vaudeville if the tree thing doesn't work out.

It amazes me that there ever WERE tree surgeons, and I'm almost as amazed to discover that they still exist. I assumed from watching cartoons that the tree surgeons rushed around and pressed stethoscopes against the trunks of sick trees, but apparently their job is more sedate than all that, despite the existence of the Davey Institute Tumbling Team. I think they basically go around and write reports.

The massive two-page advertisement in this New Yorker, however, makes me think that tree surgeons back then would work for either rich landowners or for people who ran orchards. The advertisement doesn't describe what the tree surgeons actually DID -- referring to their actions as simply "the work" -- but it must have been a huge business, considering this was the Davey Institute class of 1929:

That's a lot of tree surgeons.
Posted by Adam Thornton at 7:58 AM

Nere in NYC trees are cut down due to invasion by the Asian longhorn beetle. I assume that someone from the Parks Department (tree surgeon/specialist?) knows which ones require chopping down.

Had some tree pruning done a couple of years ago. He was no surgeon - just someone with climbing spikes and a chainsaw. A real cowboy-type.

It's a miracle that the tree-cutter didn't need a real surgeon himself.

The graduates of the Davey Institute for Tree Surgery didn't use climbing spikes...apparently they used robes and cables and "climbed like squirrels!"

Your guy sounds like he likes to live on the edge. Maybe today's tree-cutters are thrill seekers.

It's disturbing to me that most of the trees in this area are blighted by a fungus...big black splotches that grow on the leaves. There is very much of an "oh well," sort of attitude.

Ninja tree surgeons would be awesome. You'd notice a sick tree and then there'd be a puff of smoke and suddenly your tree would be all better but you'd never see the surgeon because he's a ninja.

I suppose all the tree surgeons are ninjas these days, because I never see them. I only see Gary-style cowboy types who just cut the trees down.

Well if tree surgeons were enlisted more, and contracts were not cut back - you wouldn't have incidents like the poor child that was killed in Central Park Zoo from a falling branch! 4 x tree related incidents this year in Central Park! I guess tree surgeons aren't the only ones needing to carry stethoscopes!

Aha, I'd never thought of "tree-related incidents!" Must look further into this tree surgeon business...